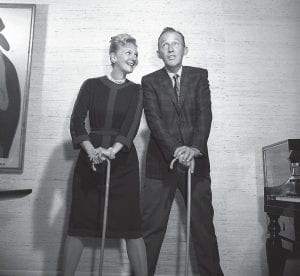 Mary Martin and Bing Crosby finally got to sing “White Christmas” together on Bing’s Christmas Eve special on TV, December 13, 1962. Mary was originally scheduled to make the movie “Holiday Inn” with Bing in 1941 in which they were to sing the duet. But advanced pregnancy kept her from making the picture then and delayed the duet for 21 years. (AP Photo)

“White Christmas,” written by the formidable composer and lyricist Irving Berlin receives its world premiere on Christmas Day in 1941 on Bing Crosby’s weekly NBC radio program, The Kraft Music Hall. It went on to become one of the most commercially successful singles of all time, and the top-selling single ever until being surpassed by Elton John’s “Candle in the Wind 1997.”

“White Christmas” took its first steps toward becoming a bedrock standard in the American songbook when Crosby first performed it publicly on Christmas Day, 1941.

The song’s success couldn’t have surprised Berlin, who despite having already written such songs as “Alexander’s Ragtime Band,” “Cheek To Cheek” and “God Bless America,” had raced into his Manhattan office in January 1940 and asked his musical secretary to transcribe “The best song I ever wrote … the best song anybody ever wrote.”

It was nearly two years later, however, that Crosby finally premiered the song on live radio, and a year after that that Crosby’s recording of “White Christmas” became a smash pop hit.

Crosby’s October 1942 recording of “White Christmas” received heavy airplay on Armed Forces Radio as well as on commercial radio during its first Christmas season, becoming an instant #1 pop hit. It also returned to the Hit Parade pop chart in every subsequent Christmas season for the next 20 years.

Unlike other perennial holiday hits, however, “White Christmas” strikes a mood that isn’t necessarily jolly. As Jody Rosen, author of the 2002 book White Christmas: The Story of an American Song, told National Public Radio, “It’s very melancholy… And I think this really makes it stand out amongst kind of chirpy seasonal standards [like] ‘Rudolph the Red- Nosed Reindeer’ or ‘Let It Snow.’… I think that’s one of the reasons why people keep responding to it, because our feelings over the holiday season are ambivalent. ”

This was certainly true of the immigrant Russian Jewish songwriter Irving Berlin. Though he did not celebrate Christmas, it was a day that held special meaning to Berlin, who had spent each Christmas Day visiting the grave of his late son, Irving Berlin, Jr., who died at just 3 weeks old on December 25, 1928.

As Jody Rosen has suggested about a beloved song of great emotional complexity, “The kind of deep secret of [“White Christmas”] may be that it was Berlin responding in some way to his melancholy about the death of his son.”