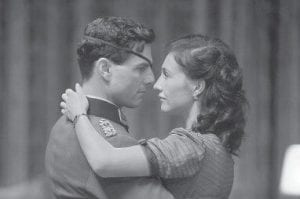 Much ado has been made about “Valkyrie,” starring Tom Cruise as would-be Hitler assassin Col. Claus von Stauffenberg.

There is the release date, which has been moved around several times until finally being set for Christmas, the perfect time for a feel-good movie about killing Nazis. There’s the marketing of the film: Is it a historical thriller featuring Cruise in an eye patch, or is it a straight-up action picture full of explosions? And then, of course, there is the Cruise factor itself — the fact that his very presence adds a layer of tabloid-friendly fascination.

Turns out Cruise is both the central figure in “Valkyrie” and its weakest link. He’s distractingly bad in this, the iconography of his celebrity so strongly overshadowing his performance. He’s just too powerfully contemporary. With his hard, flat American accent, he stands out in every single scene. And he’s not a good enough actor to immerse himself in this kind of period piece, or allow us to do the same. (Then again, if he had affected a German accent — or a British one to blend in among his co-stars — he would have invited derision for that, too. Maybe the guy just can’t win.)

It’s too bad, too, because “Valkyrie” looks great. With its impeccable production design and German locations — including the Bendlerblock in Berlin, where Operation Valkyrie began and where members of the anti- Nazi resistance were executed after it failed — it feels substantial, never CGI-fake, and it moves fluidly. No one ever doubted the ability of Bryan Singer, director of the first two “X-Men” movies, to make a solid, energetic actioner. But — and this is going to sound like more piling on — Cruise undermines the potential of “Valkyrie” at every turn.

He’s outclassed and outmatched by every member of the strong supporting cast, any of whom would have been more believable as Stauffenberg: Kenneth Branagh, Tom Wilkinson, Terence Stamp and Bill Nighy as fellow German officers, even Eddie Izzard, who’s a unique and unexpected choice.

Then again, the script from Christopher McQuarrie, who won an Academy Award for writing Singer’s breakthrough film “The Usual Suspects,” never fully fleshes out his motivations. (Nathan Alexander is a cowriter.) Stauffenberg is depicted as a loyal but wounded army officer who loves Germany yet finds himself increasingly horrified by Adolf Hitler’s rise to power.

But we never get a sense of inner conflict, of the doubt he may have felt in betraying his duties, of the fear he may have faced in putting himself and his family in danger by going through with the plan. When Stauffenberg states with clenched-jawed, hushed certitude, “We have to kill Hitler,” we’ll just have to take his word for it that he feels strongly about the task he’s about to lead.

He joins the German Resistance for the last of several failed plots to take out Hitler, scheduled for July 20, 1944. Stauffenberg was to plant a bomb and then head a regime change known as Operation Valkyrie, based on Hitler’s own emergency plan to keep the government running in case of his death.

As we all know from the start, that didn’t happen — Hitler killed himself a year later — and surprisingly, Singer never generates enough suspense to make us forget that as we’re watching. The whole effort feels rather smoothly detached. The actual bomb-orchestration sequence is well-staged and has a few breathless moments, but a scene that’s supposed to be pivotal and poignant — when Stauffenberg reluctantly thrusts his partially amputated arm in the air and declares “Heil Hitler!” — instead comes off as laughable.

“Valkyrie,” a United Artists release, is rated PG-13 for violence and brief strong language. Running time: 120 minutes. One and a half stars out of four.