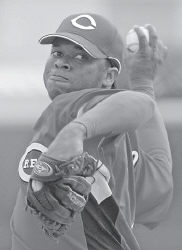 Johnny Cueto ascends the mound, digs the toe of his right shoe into the dirt and scrapes a guiding line from the edge of the rubber toward home plate.

Properly lined up, he starts his warmups.

The Cincinnati Reds rookie throws hard, right from the outset. He releases the ball with more energy than elegance, whipping his right leg around forcefully to get every bit of oomph out of his 5-foot-10 frame.

Everything about him says: Power.

Cueto is 22 years old and throws 96 mph. Those two numbers only begin to explain his significance to the Reds, who are starting to see results from years of playing catch-up in international scouting.

The fact that baseball fans are seeing him in a Reds uniform is noteworthy.

Former scout Johnny Almaraz, who helped set up the Reds’ operations in the Dominican Republic a decade ago, signed Cueto in March 2004 when a friend suggested he watch the short, slender youngster throw during one of his visits.

Cueto signed for $35,000, according to former general manager Wayne Krivsky, not the $3,500 that has been widely reported. Right away, he impressed with his ability to throw hard and throw strikes.

He added weight – he’s up to 183 these days- and wore No. 45 in the minors to honor his idol, Pedro Martinez, a 5-foot-11 power pitcher from the Dominican. Cueto learned a changeup from former Reds pitcher Mario Soto, who works in player development and scouting.

Best of all, he showed a knack for throwing strikes with a fastball that tops out at 96 mph and a slider that takes a forceful turn at the plate. He soared from the bottom of the farm system to the top last season.

The Reds had him pegged for Triple-A when he showed up at spring training. What they saw in March made them reconsider: batters hit only .239 off him.

“I’ve got to be honest: Going into spring training, there were probably more reasons to think he would start the season at Triple-A than here,” Krivsky said, in an interview shortly before he was fired last week. “He pitched so well that he forced our decision. Actually, he made our decision easy.”

His debut made him an overnight sensation.

Cueto became the first pitcher in modern baseball history – since 1900 – to strike out 10 without walking a batter. He gave up nothing more than Justin Upton’s solo homer in seven innings of a 3-2 win over Arizona on April 3, retiring the first 15 batters he faced.

When he left the game, fans gave him a standing ovation. Cueto, who lets teammates translate during interviews, knew what that meant.

What they loved was the way he challenged batters with inside fastballs and didn’t waste pitches. Before giving up seven runs in St. Louis last night (Tuesday), Cueto (1-3) had walked only five and struck out 31 in 33 1-3 innings.

“He goes after batters with quality strikes. He doesn’t go after them right down the middle; he goes after them most of the time low and away on the black, and it’s about 94-95 mph. Whew.”

No one has illusions that Cueto will dominate all season. In a 5-3 loss to Houston last week he gave up five runs and eight hits, the most in any of his five starts. There will be many growing pains along the way.

That he’s even in the big leagues is reason for optimism.

The Reds spent the 1990s trying to establish a presence in the Dominican Republic and Venezuela, where they were far behind other teams. With former owner Marge Schott slashing the farm system, the Reds had virtually no international scouting.

“Nonexistent,” said former Reds assistant general manager Doc Rodgers, who joined the front office in 1993 and was given the job of changing the situation. “We had no academy. So if we signed a kid, he was straight up here in the States and God bless him. It was just a rush job to have a player here. If you didn’t have a scout there, you might have a contact, a former player there, tip us off to a guy that has potential.”

To be fair, other teams had a limited presence in the region at the time. The Reds’ first breakthrough came when former pitcher Jose Rijo opened a baseball academy in the Dominican in the late 1990s and had a working agreement with Cincinnati to develop players.

Currently, the Reds share a complex there with the Twins, Diamondbacks and Cubs. Scouting and player development budgets have increased substantially under the last two owners.

A few players have come through the pipeline. Righthander Jose Acevedo signed in the Dominican and went 16-21 with the Reds from 2001-04. Shortstop Ray Olmedo, signed out of Venezuela, played for the Reds from 2003-06.

“He knows he’s good,” catcher Paul Bako said. “He’s not cocky, but he’s got a confidence about him.”