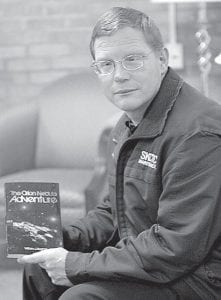 This week marks the nationwide release of “ The Orion Nebula Adventure,” a new novel from Kentucky author William J. Hughes.

The book tells the story of Katie, Jennifer, and Ben Graham, who lost their mother years ago in a presumed terrorist attack at one of Earth’s universities in the space colonies. After this attack, which led to the conflict known as the Mars War, Katie, her siblings, and their father each found their own way through life and coping with their loss — apart from each other.

Published by Tate Publishing and Enterprises, the book is available through bookstores nationwide, from the publisher at www.tatepublishing.come/bookstore, or by visiting barnesandnoble.com or amazon.com.

Hughes lives in Cumberland where he is a maintenance worker at Southeast Kentucky Community and Technical College. He had a talent for writing as a child, and then as an adult, he rediscovered this talent as a means of therapy. “The Orion Nebula Adventure” is his first book.

For more information, contact James Branscum at (888) 361-9473 or email james@tatepublishing.com.