‘Cupid’ gets 2nd chance on ABC 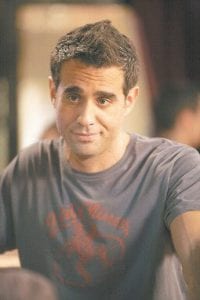 Love sometimes get second chances, but failed TV series rarely do. “Cupid” has become one of those rare exceptions.

ABC has resurrected the romantic comedy that lasted 14 episodes on its schedule in 1998-99. It premiered this week and will now air on Tuesdays in a plum 10 p.m. time slot following the network’s biggest hit, “Dancing With the Stars.”

Yet it’s not the same series that its fans may fondly remember, and not only because original stars Jeremy Piven and Paula Marshall are not available this time.

ABC had been kicking around ideas with Rob Thomas, the original series creator who had gone on to other projects like “Veronica Mars.” The network executives said they were thinking about something like “Cupid,” when the light bulb went on over their heads: Why not just do “Cupid” again?

This sort of remake is something of a taboo, even for an industry where series fail much more often than they succeed, frequently for reasons that have little to do with their quality.

“A lot of people feel like there must be some sort of stigma attached,” said Kim Rozenfeld, ABC’s senior vice president of current programming. “If you tried and didn’t succeed, you shouldn’t touch it again.”

There was plenty of affection for “Cupid” within ABC a decade ago, he said. But it was a time the network lacked focus and was groping for an identity. ABC may not explicitly say so, but it’s now a network that targets female viewers and hopes they bring their boyfriends or husbands along. A story involving a man who envisions himself as a modern-day Cupid despite others thinking he’s insane fits the mission perfectly.

Thomas believes the initial series failed because of scheduling. It was first aired Saturdays at 10 p.m., precisely when the young singles who might be attracted to the story are likely out doing something else.

He pleaded for something better, and finally it was moved to a weeknight — Thursday, at a time NBC’s “must-see TV” had a stranglehold on viewers.

“We got demolished,” he said.

The first “Cupid” exists only in memories, never getting a DVD release even though it was Piven’s first starring TV role before later achieving fame on “Entourage.” Thomas had to hunt down a DVD copy of the series in Mexico; the only one he owns now has Spanish subtitles.

“The nice thing about the experience is that ABC treated us very well 10 years ago, aside from canceling it and scheduling it very badly,” he said. “The creative arm of the network, the people I dealt with on a regular basis, loved the show and were very enthusiastic and respectful about it.”

The new version stars Bobby Cannavale of “Will & Grace” as Trevor Pierce, who believes he’s the Roman god of love and claims he’s been sent to New York to bring 100 couples together before he can return to Mount Olympus. His foil is psychiatrist and self-help author Claire McCrae, played by Sarah Paulson. She believes there’s a science to love, while Pierce believes in magic.

Besides the new cast, Thomas said “Cupid” 2.0 has, at ABC’s insistence, a greater emphasis on the couple Pierce and McCrae are trying to bring together each episode. His original model was a series like “Moonlighting,” where each week’s detective case was secondary to the relationship between the two lead characters.

The first series “would have three-and-a-half page scenes of Trevor and Claire bickering,” Thomas said. “Now you never have that. I think there’s a belief that people don’t have the patience for that. I’m not sure I subscribe to that belief.”

Rozenfeld said he disagreed with a conclusion that the series now emphasizes the romance of the week instead of the lead characters. “I think there is equal focus,” he said.

Since TV dramas have less content and more room for commercials than they did a decade ago, it’s a challenge to get viewers emotionally invested in characters, he said.