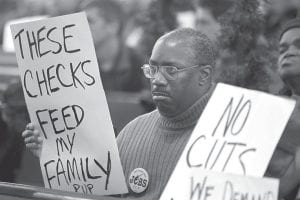 Frank Wallace, who is unemployed, displayed a sign during a “Vigil for the Unemployed” at the Arch Street Methodist Church in Philadelphia last week. The number of people applying for unemployment benefits fell sharply last week to the lowest level since July 2008, a hopeful sign that improvement in the job market is accelerating.(AP Photo)

If Congress lets unemployment benefits expire this week for the long-term unemployed, they won’t be the only ones to feel the pain. The overall economy would suff er, too.

Unemployment benefits help drive the economy because the jobless tend to spend every dollar they get, pumping cash into businesses. A cut-off of aid for millions of people unemployed for more than six months could squeeze a fragile economy, analysts say. Among the consequences they envision over the next year:

— Annual economic growth could fall by one half to nearly 1 percentage point.

— Up to 1 million more people could lose their jobs.

— Hundreds of thousands would fall into poverty.

“Look for homelessness to rise and food lines to get longer as we approach Christmas if the situation can’t be resolved,” says Diane Swonk, chief economist at Mesirow Financial.

The issue is expected to be taken up in the lame-duck session of Congress that resumed Monday. Among other unfinished business, lawmakers are likely to vote on whether to extend 2001 and 2003 tax cuts that are set to expire at year’s end.

The average weekly payment for the roughly 8.5 million people receiving unemployment benefits is $302.90. But it ranges widely: from an average of $118.82 in Puerto Rico to an average of $419.53 in Hawaii. Each state sets the amount through a formula meant to replace a portion of an unemployed person’s old income.

That money ripples through the economy, into supermarkets, gasoline stations, utilities, convenience stores. That allows those businesses to hire more people, who, in turn, spend more money.

The Congressional Budget Office says every $1 spent on unemployment benefits generates up to $1.90 in economic growth. The program is the most effective government policy for generating growth among 11 options the CBO has analyzed.

Mark Zandi, chief economist at Moody’s Analytics, puts the bangfor a-buck figure at $1.61, and a recent Labor Department study estimates it at $2.

Analyst Mark Miller of William Blair & Company figures that, in particular, discount retailers like Dollar General and Family Dollar will see their revenue pinched by a couple of percentage points next year if extended unemployment benefits expire.

“If you’ve been unemployed for six months, you’ve gone through your savings,” says Heidi Shierholz, economist at the Economic Policy Institute. “You have no choice but to spend (benefits) immediately.”

By contrast, money given to higher-income families — say, through tax cuts — tends to deliver less economic benefit because those taxpayers typically save a big chunk of their windfall.

In July 2008, Congress began extending unemployment benefi ts, which can now last for up to a record 99 weeks: 26 weeks of regular benefits from the states, plus up to 73 weeks in federal aid in states with high unemployment rates. As of last week, about half the states off ered the maximum 99 weeks of benefits. The extended federal benefits will start phasing out on Wednesday if Congress doesn’t act.

When lawmakers extended the benefits, they were responding to a jobs crisis: Unemployment was on its way to double digits for the first time since the 1981-82 recession. The long-term unemployed — those out of work for more than six months — hit a record-high 6.8 million in May this year. Those people represented 46 percent of all unemployed Americans. That’s the highest such proportion on record dating to 1948.

Unemployment peaked at 10.1 percent in October 2009. It’s been stuck at 9.6 percent the past three months.

At its peak in the first week of this year, just over 12 million people were receiving unemployment benefits — the most on records dating to 1986. The Labor Department estimates that if Congress lets the aid run out, nearly 2 million people will lose their benefits by Christmas.

Without an extension of aid, the number of impoverished Americans would rise, economists say. The income from unemployment checks kept 3.3 million people from falling into poverty in 2009, according to government estimates. The Census Bureau defines poverty as annual income of less than about $22,000 for a family of four.

Some economists worry that renewing jobless aid would discourage some unemployed people from seeking work. But a study this year by the Federal Reserve Bank of San Francisco downplayed the impact as “quite small.”

For most recipients, the average $300 weekly unemployment check doesn’t go very far: It covers just half of basic household expenses, according to the National Employment Law Project.

In Glenview, Ill., Robert Horvath is barely hanging on. He says his jobless aid — $385 a week — doesn’t amount to even 15 percent of his former income as a commercial loan officer. Out of work nearly six months, he’s paying $1,300 a month to keep his health insurance. He’s burning through his savings and is trying to hold onto his home of 25 years.

Thirty-three economists have signed a statement circulated by the liberal Economic Policy Institute calling for benefits to be extended for 12 more months. Signatories included Alan Blinder, a former vice chairman of the Federal Reserve, and five winners of the Nobel Prize in economics, including Joseph Stiglitz and Robert Solow.

Republican lawmakers oppose an extension of the unemployment aid if it would enlarge the government’s $1.3 trillion budget deficit. They insist that the cost — around $5 billion a month — be off set with budget cuts elsewhere. Those cuts would reduce the economic impact of extending the benefits. Some in Congress want to pair an extension of unemployment aid with a deal to also extend the Bush-era tax cuts.

Just outside Chicago, Horvath wonders why the lawmakers can’t reach a deal: “What’s going to happen Dec. 1 when I have no benefits at all?”