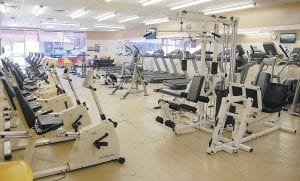 Although the Whitesburg Wellness Center was empty Tuesday afternoon, about 35 men and women use it on a daily basis. The facility will close August 29 because of federal black lung benefit cuts.

MCHC President and CEO L.M. “Mike” Caudill said the cuts are the result of the non-profit clinic losing $133,000 in federal funds.

Because the Wellness Center, which has been free to patrons, was funded through the black lung program, Caudill said it would have to be closed in order for MCHC to continue providing the “direct medical services” needed by the area’s retired coal miners who suffer from black lung disease.

“We were completely taken by surprise,” Caudill said of the funding cuts, adding that U.S. Rep. Harold “Hal” Rogers and U.S. Sen. Mitch McConnell are still trying to determine why the cuts were made to a clinic that serves so many in the heart of Appalachia’s coal country.