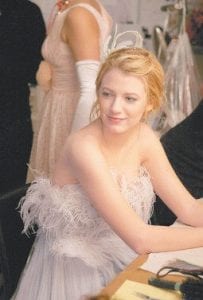 Somewhere in Hollywood, writers are polishing the pilot episode for a "Gossip Girl" spinoff set in a distant time that much of the CW network’s target audience has no memory of — the 1980s.

Teenage angst is teenage angst, and the CW expects that its viewers can appreciate it, no matter the era. The untitled spinoff is a flashback to the youthful years in Los Angeles of Lily van der Woodsen, the mom of Blake Lively’s "Gossip Girl" character.

The three-year-old television network is betting its future on the whims of young women, almost to the exclusion of everybody else. By designing a schedule that appeals to them, the CW hopes to build an identity where there really hasn’t been one in the three years that it’s been operating.

"We really needed to stand out in the marketplace and not be another broadcaster," said Dawn Ostroff, CW entertainment president. "We almost had to be a hybrid of a cable and a (broadcast) network."

There were high hopes at parent companies Time Warner Inc. and CBS Corp. when the old WB and UPN networks shut down and combined into a single entity with the best programs from each. But it has never come anywhere near a network on par with ABC, CBS, NBC and Fox, giving rise to talk that it would be shut down.

Even the numbers during this season are alarming: the CW’s average of 2 million prime-time viewers is down 24 percent from the year before, according to Nielsen Media Research.

Those numbers are a little deceptive, skewed by the shift of the popular professional wrestling night from the WB to My Network TV. As Ostroff points out, the CW sells advertising almost exclusively aimed at an 18-to-34-yearold female audience, among whom the new "90210" is a hit and "Gossip Girl" and "One Tree Hill" have shown growth.

Studios owned by the parent companies supply the CW’s women-centric programming. Even if the CW itself doesn’t make money, these studios are realizing profits from the shows.

Ostroff said she never sensed that the CW’s survival has been at real risk.

My Network TV, which began as a service to feed to stations left out when the WB and UPN shut down, has also recently retreated from the traditional broadcast business and will offer less original programming to its stations.

The focus on young women is in the CW’s ancestry. The WB network had its best years with programs like "Dawson’s Creek" and "Buffy the Vampire Slayer." It stumbled in trying to broaden its appeal in later years and UPN, then run by Ostroff, changed its focus to young women before it was shut down.

After its success "90210" remake, the CW has a do-over of "Melrose Place" in the works. Other potential new series include "Vampire Diaries" and "Body Politic," hoping to tap into an interest in vampires and the idealism of the Obama administration, and "Light Years," about a teenage girl getting out of foster care and trying to reunite her birthparents.

Ashton Kutcher is behind "Beautiful Life," about an apartment house populated by models.

Although the CW sells the 18- to-34-year-old demographic, it’s also clearly reaching out to younger girls. Who would better appreciate the appeal of a "Gossip Girl" ad campaign, where the network used a Parents Television Council quote about the series — "mind-blowingly inappropriate" — as a point of pride?

"The more you define what your brand is and what you stand for, that is probably the key to survival," said Shari Anne Brill, senior vice president for the Carat media buying agency.

The downside to having such a specialized appeal is that it cuts off the potential for further growth, Brill said.

Besides trying to keep the network afloat during a terrible advertising climate, Ostroff faces two big challenges in programming Friday and Sunday next year. Both are weak spots, and the network’s experiment in letting an advertising agency program its Sunday lineup last fall was a disaster. The CW’s temporary fix of a Sunday movie may stick.

Elsewhere, the CW’s focus is clear.