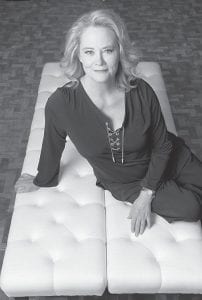 Actress Cybill Shepherd on the set of “The Client List.” (AP Photo)

For Cybill Shepherd, her role on “The Client List” is all about happy endings.

After a career as a teen model in the late ‘60s, she made her transition to film as the muse to boyfriend-director Peter Bogdanovich in his critically beloved “The Last Picture Show,” and then scored commercial and critical success again in director Elaine May’s “The Heartbreak Kid” and Martin Scorsese’s “Taxi Driver.”

But two ambitious big-screen Bogdanovich disappointments (“Daisy Miller” and “At Long Last Love”) were, in part, the reason she retired in the late ‘70s.

Shepherd returned with two successful TV series, the ‘80s detective comedy “Moonlighting” and the ‘90s sitcom “Cybill,” the memories of both tarnished by stories of behindthe scenes strife after Shepherd was snubbed by the Emmys and watched co-stars Bruce Willis and Christine Baranski go home with the gold.

She addressed those issues in her 2000 autobiography, denying behindthe scenes arguments, but admitting: “The grain of truth is this: Who doesn’t want to win an Emmy?”

Since then, the 62-year-old Shepherd has focused on family and work. Despite eternal leading-lady looks she took on a blast of colorful supporting character-actor roles. She’s a regular in Lifetime’s “The Client List,” which has seen its audience grow to 2.9 million viewers, making it the network’s second-highest-rated Sunday series, right behind its perennial hit “Army Wives.” In demographic-focused cable-network terms, it’s a breakthrough hit.

In the series, Shepherd portrays the Bible-thumpin’, tough-Texas-talkin’ mama Linette with the tease-it-to- Jesus-hairdo. Her only child, Jennifer Love Hewitt’s Riley, is forced to support her family working as a masseuse — and not the kind her mama thinks.

“I think ‘the iron butterfly’ is how they referred to (the late first lady) Lady Bird Johnson. Of course that became ‘steel magnolias,’ so, definitely, Linette falls into that category,” Shepherd said in a recent interview. “And, also, as Ann Richards, for former governor of Texas said, ‘The bigger the hair, the closer to God.’”

It takes some doing to get Shepherd’s shoulder-length golden hair to that high state. “(Linette’s hair) has got a life of its own. You learn to do it. I can’t do it on myself like that,” she continued. “But I’ve had hairdressers, and they just make my hair huge.”

And then there’s that accent. Memphis native Shepherd naturally has a soft, sultry drawl, but had to get the stronger Texas sound down for “Picture Show,” and it still proves no small feat.

“I can overdo the Texas accent. I, at one point, was saying, ‘Y’all HAWNgry?’ And the executive producer, who is from Texas, came up from Beaumont, said, ‘We don’t say HAWN-gry. We say, ‘HUN-gry.’ And I was like, ‘Oh, thank you. Tell me that as soon as you notice it.”

For Shepherd, the “Client List” role feels a bit like following in the shoes of her mentors. She was just 20 when she did “Picture Show,” opposite veterans Eileen Brennan, Ellen Burstyn and Cloris Leachman (the latter winning an Oscar for her performance). “And they were all playing these wonderful older characters in their prime. And I feel like this is my chance to do that.”

Off screen, the twice-divorced Shepherd is very close to her three children, “but I don’t have kids at home anymore. I have a 15-year-old cat.” And there is a boyfriend. “Mum’s the word. We’ve managed to stay under the radar.”

But not as an actress: In addition to “Client List,” it’s likely she’ll return to “Psych,” on which she’s made guest appearances, and she just signed to appear as a guest on “Hot in Cleveland.”

She also said we’re likely to see a video of a greatly improved “At Long Last Love” — the version of the flop that director Bogdanovich intended to release before the studio took it out of his hands.