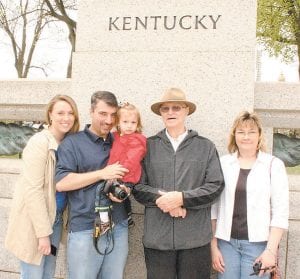 Ray Shortt of Jenkins visited Washington, D.C., to celebrate his 90th birthday and visit the World War II Memorial. Shortt’s daughter and son-in-law, Teresa and Chuck Johnson, drove him to Hamilton, Va., where he visited with his grandson, Tom Abdoo and his wife April, and his greatgranddaughter, Aaliyah Abdoo.