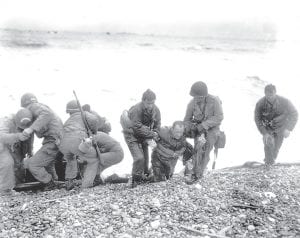 Members of an American landing unit helped their exhausted comrades ashore during the Normandy invasion, June 6, 1944. The men reached the zone code-named Utah Beach, near Sainte Mere Eglise, on a life raft after their landing craft was hit and sunk by German coastal defenses. (AP Photo)

On June 6, 1944, 156,000 Allied troops crossed the English Channel in the largest amphibious invasion in history. D-Day brought the beginning of the end of World War II.

Seventy years later, some of the few remaining veterans spoke recently of the harrowing assault — the parachute drops into pre-dawn darkness, the desperate scrambles ashore from landing craft under withering German fire, the heroic acts that saved lives or comforted the dying.

Amid the recollections of terror and valor, some of the vets, now in their late 80s and 90s, also pondered how — or even whether — future generations will remember that “longest day.”

“In 20 years, there will be no veterans around to tell them this was the day that saved the world,” says 92-year-old James Krucas of Racine, Wisconsin, whose actions earned him the Silver Star.

“You can hear the boats hitting the waves, and you can hear guys calling for a medic on those waves,” the retired bank director says. “And I still, after all these years, I wake up at night sometimes, thinking about the guys …”

The Jeep carrying Lambert’s medical chests and the rest of his gear had sunk to the bottom of the Channel. Working with what he was carrying, he began sorting the floating wounded from the dead and dragging them ashore.

The young staff sergeant was applying tourniquets and doling out morphine when something passed through his right arm, just above the elbow. The arm went numb, but he continued his grim work. Then a piece of shrapnel “about the size of my hand” struck him in the fleshy part of his left thigh, opening a huge gash. Lambert packed the wound, wrapped a tourniquet around his leg and went back to work, but he was running out of supplies.

Weakened by blood loss, Lambert found one of his men — Cpl. Raymond Lepore.

“I’m not going to make it much longer,” he said. “You better try to get the men together and see what you can do about treating some of these guys.”

Lambert had barely finished giving the order when Lepore “got a bullet right through his head and fell against my shoulder.”

In 1995, the 16th Infantry Regiment made Lambert a “distinguished member.” With the honor comes responsibility to carry the message for those who’ve passed. But, sometimes, Lambert gets discouraged.

A couple of years ago, he was eating at a restaurant when the waitress overheard him discussing an upcoming trip to Omaha Beach. He asked if she knew where that was.

“And she thought for a minute and she said, ‘Well, I think it’s down near Myrtle Beach, isn’t it?’” he says with a sigh.

LESLIE PALMER CRUISE JR., 90, a retired architect from Horsham, Pennsylvania, who received a Purple Heart, the Bronze Star and a Presidential Unit Citation:

At Cottesmore Airdrome about 100 miles north of London, the sound of aircraft all winding up their engines at once was like “thunder” to PFC Cruise and the other members of H Co., 505th Parachute Infantry Regiment, 82nd Airborne. Their twin-propeller Douglas C-47, “Whiskey 7,” was among about 11,000 aircraft that would take part in the invasion.

Like the other paratroopers, Cruise was loaded down with about 100 pounds of gear: A dissembled M-1 rifle, 30-caliber ammo, a first-aid pack, one orange smoke grenade, K-rations and, in the pocket over his heart, a New Testament. As the plane rumbled down the runway, all he could think was: “Let’s hope this thing gets off the ground.”

Before long, they were over the Channel. Looking down, Cruise could see the outlines of thousands of ships, “all sizes and kinds,” on the water below.

At the coastline, flak from German anti-aircraft batteries began bursting in the air around them. When they reached the drop zone — near the village of Sainte-Mere- Eglise — a green light flashed, and the colonel shouted, “Let’s go.”

They leapt into darkness, and Cruise could see comrades’ silhouettes drifting around him. Falling rapidly, he cleared a 30- foot hedgerow and slammed backward into the French soil.

Cruise expects to be there this year when the restored Whiskey 7 once again disgorges American parachutists over Sainte-Mere- Eglise.

CHARLES SHAY, 89, a member of the Penobscot Indian tribe who lives on the reservation at Old Town, Maine, who received a Silver Star, Bronze Star, and the French Legion d’Honneur:

“We had waves 4 to 6 to 8 feet. We had to jump into the boat (landing craft) when it was at its highest point to avoid breaking our legs.”

Shay recalls the sound of shells passing overhead — both from the Germans ashore and their own ships behind them.

Many men standing at the front when the crafts’ ramps dropped were immediately killed, he says. Others were pulled down by their heavy equipment and waterlogged clothes. Through chest-deep water, Shay dragged himself past the dead and floundering and made it to the beach.

“ You could not expect help from anybody, because it was a matter of survival. We had to get to the beach.”

In the chaos, Shay became detached from his company. Roaming the sand, looking for men to help, he came across a fellow medic. The man was bleeding from a hole in his stomach. They both knew he was dying.

“ I bandaged him as best I could,” Shay says softly. “I gave him a shot of morphine, and we said goodbye to each other — forever.”

This year on D-Day, Shay plans to be at Omaha Beach. As he has done in years past, the tribal elder will wake early, while the tourists and dignitaries are still abed, and walk to the water. At 6:30 a.m., about the time the invasion began for him, he will perform a solemn Penobscot ceremony, the details of which are only for himself and “the men that have remained there.”

“I try to remember the spirits of the men that are still there,” he says, “and try to communicate with them.”

He cares little whether, after he’s gone, people will remember his part that day.

“But,” he says, “I hope that the men who paid the ultimate price — the true heroes — will never be forgotten.”