April 25 was a critical day in our democracy. Five presidents of the United States gathered in Houston for the dedication of the George W. Bush library. One was his father, 89 years old and in a wheelchair. The other three were men of the opposite political party.

They gathered together out of respect for the presidency of the United States.

They paid tribute to a patriot.

It’s always stunning to see the presidents assembled. There are comments about how they look (older), what they said (President Clinton was the funniest) and even who stood with whom. 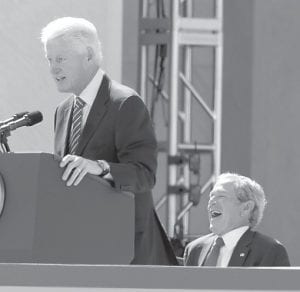 Presidents Clinton and Bush shared a laugh at the Bush Library last week.

Years ago, in the early years of the Clinton presidency, I was asked to participate in a program at the Reagan Library. The truth is, I was there as a last-minute favor to the library’s gracious director. There had been a cancellation, the Reagan Library is an hour’s drive away, they needed a voice from my perspective, and I was happy to oblige.

I went out of my way to be gracious to a former president I had vigorously campaigned against, in both 1980 and 1984. I spoke, as one does on such occasions, about my respect for his courage and determination, his commitment to his ideals, his service to the country. Polite applause. I then went on to say how important these values are in a democracy, more important than the disagreements we may have — that many in the room no doubt had — with the current president.

With the C-SPAN cameras whirring and Nancy Reagan in the front row visibly horrified, the crowd booed me. Loudly. By the time I got home, a beautiful bouquet of flowers was waiting for me, with apologies from Mrs. Reagan.

I remembered that day as I watched the video of the former presidents and the gracious applause of the crowd.

How easy it is to forget — with the scream-a-thon among often ignorant pontificators that has come to dominate our political debate — that mutual respect and decency are what make our democracy work.

How easy it is to forget — in the battle to see who can destroy the other side first, fastest and most viciously — that we are all, ultimately, on the same side.

I’m not a Pollyanna. I believe in fighting for what I believe in, and I have tried to do so my entire adult life. But I don’t hate Republicans. I never hated either President Bush. Disagreed with? Often. Vigorously? To be sure. But hate? No. Gratuitous personal assaults? No.

Of course, there are days when, as must happen in a democracy, we divide into our separate corners, pushing our separate agendas. But we are better than those who scream for the sake of seeing themselves on television. In the horrors of the past week, my home city came together as “One Boston,” and Americans everywhere showed their generosity. As the presidents demonstrated last week, it is possible to maintain our differences while saluting what unites us.

It’s too bad it takes a presidential library dedication to do that.