Dad: P.J. is much more than just a scorer 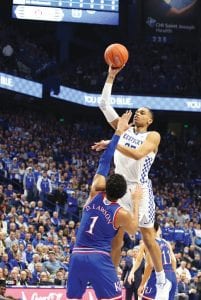 Sophomore P.J. Washington admits he gets lackadaisical at times and that makes coach John Calipari angry because he says Washington has the talent to be one of the nation’s best players.

Sometimes Paul Washington Sr. admits he gets a bit frustrated when his son, P.J. Washington, seems to be judged just by how many points he scores in a game.

“You can look at scoring, but he’s just a winner. If his team needs him to score 20, he’ll do it. If it needs five points and eight rebounds, he’ll do that. He’s not a guy who is unhappy if someone else scores 20 points, he gets five and the team wins,” Paul Washington said. “If you watch, you will see him celebrating a great pass as much as a 3 or dunk. Sometimes I think the media just believes 20 points is a good game but there’s a lot more to his game than that.”

The UK sophomore’s father says his son’s defense and ability to stretch the floor with his improved 3-point shooting is often overlooked by some along with his rebounding.

“He can score, but look at the way he guarded Luke Maye in that North Carolina game. That was bigger than scoring,” Paul Washington, a former prep school coach, said. “As a coach’s son, he knows the game and understands what is coming. If you look, you can see the growth he’s had in his game since last year.”

ESPN analyst Dick Vitale was critical of P.J. Washington for not consistently putting up big scoring and rebounding numbers like he has done in some games.

— Early in the season he averaged 21 points, 12 rebounds and 2.7 assists per game in consecutive games against North Dakota, VMI and Winthrop. He had a career high 18 rebounds against VMI.

— Against Seton Hall he had a career-best 29 points, 12 rebounds, four blocks and four assists. He went 12-for-13 at the foul line.

— In UK’s win over North Carolina, he had 11 points, 10 rebounds and eight assists to just miss becoming only the fourth UK player ever with a triple-double.

— Last week against Mississippi State he led UK with 21 points and made three 3-pointers to go along with six rebounds and four blocks. In the win over No. 9 Kansas last Saturday, he had his second straight 20-point game — the first time he’s done that — and had 20 points, 13 rebounds, two blocks, one assist and one steal.

So why hasn’t he had numbers like that in more games?

“Sometimes I’ll get lackadaisical and won’t get a rebound or something, and that’s when he (UK coach John Calipari) will take me out,” Washington said. “Then, when I come back in, I just try to get the flow going and try to be aggressive.”

What makes him get lackadaisical?

“I have no idea,” Washington said. “If I knew that, it wouldn’t slow down.”

Calipari admits he can get “angry” with Washington when he plays without a full motor.

“We just have to tell him it is not acceptable (to play that way),” Calipari said. ”When I don’t see that motor, it drives me nuts. You should be the best player in the country. So what would lead you not to go after these dudes every minute and then say, ‘Coach, can you give me three or four minutes, let me get my breath and I’ll be ready to go and then go kill them again’ and everybody across the country is talking about P.J. Washington.

“You can’t be afraid of being the best. Be the best. But you know what? It’s hard. And how about this? Living up to it every game? Even harder.”

Washington is averaging 12.3 points, a team-high 7.8 rebounds, 1.9 assists and 1.2 blocks per game and is being projected as a mid first-round pick in the 2019 NBA Draft. He put his name into the draft after his freshman season but opted to come back to UK after being evaluated by NBA personnel.

“If he had been guaranteed he would be a first-round pick, he would have left. He wasn’t, so he came back. That’s what we said from day one,” Paul Washington said. “It was never that he didn’t like Kentucky or college. But when you don’t say anything to people, they just come up with news like some did about him not wanting to be back at UK.

“He enjoyed the team last year. It has a totally different dynamic this year. It’s truly a family. There have been some peaks and valleys but this is truly a team and Cal and his staff have done a great job getting this team to where it is now.”

Kentucky signee Dontaie Allen had surgery on his knee January 8 at the UK hospital and has been having physical therapy three times a week since then at the hospital.

The Pendleton County senior was leading the nation in scoring at 45.7 points per game when he tore the anterior cruciate ligament in his knee in his 13th game of the season. He was also averaging 14 rebounds, 4.1 assists, 3.1 blocks and 1.8 steals per game.

“Dontaie has handled everything with great poise. Initially, he was upset like any teenager would be,” Pendleton coach Keaton Belcher said. “To not be able to finish his senior year the way he wanted to has been the biggest disappointment. He is determined to conquer this setback with the work ethic that he’s always displayed.

“The last month has been difficult for myself, our staff, our team and our community. We got really spoiled watching Dontaie play basketball the last five years and it ended in the blink of an eye. He is an exceptional talent, but also an exceptional person.

“Like Dontaie, we were all emotional when we first heard the news. I have sort of told Dontaie that he can enjoy these last five months of being a regular high school student. He’s always sort of been in the spotlight and has had pressure put on him to perform. Now he can be a fan of the game and support his teammates.”

Belcher said the normal time frame for a full recovery from an ACL injury is six to 12 months.

“We are still waiting to see how his physical therapy goes. If healthy, I believe that he can be a contributor at UK (next season),” Belcher said.

If not, then he likely would be redshirted his freshman year like Jemarl Baker was last season due to his knee injury.

Kentucky’s play in recent weeks not only has rejuvenated the UK fan base, but it has also impressed rival coaches.

“They’re always going to play good defense. They’ll play different ways based on their team and their personnel. They’re always good defensively, and they’ll always take good shots. I think a big trademark is that they try and beat you up on the glass,” Mississippi State coach Ben Howland said.

“Every year, Kentucky is always way up at the top in rebound margin. This year, there’s no exception. They really try to pound you on the glass, and they get to the line 20 times a game plus. They’re battle-tested. Every time they play anybody, it’s that team’s big game because you’re playing the iconic Kentucky program and brand.”

Kansas coach Bill Self was even bolder with his praise of Kentucky.

“They are a team that can win a national championship. I know everybody thought that before the season and then you have one game (a loss to Duke to start the season) where the attention shifts,” Self said. They’ve grinded their way back to where they are right now and that’s being one of the best teams in the country.”

As far as Matthew Mitchell is concerned, Maci Morris has always been a coach.

The Kentucky senior recently was selected to be part of the Women’s Basketball Coaches Association’s “So You Want To Be A Coach” program April 3-5 in conjunction with the WBCA Convention in Tampa.

“It’s funny she got selected to that because I’ve been calling her coach Morris for quite some time now,” Mitchell said. “She’ll often stop me in practice and tell us what we need to do. I think she has a very bright future as a coach.

“We are so honored that she got selected to that program. Only 60 kids around the country get selected, so coach Morris will do fine with that.”

Morris, Kentucky’s leading scorer, knows plenty about coaching because her father, Lewis Moore, is a long-time Kentucky high school coach and she’s had an interest in coaching in the future.

“Learning from Coach (Mitchell), the different tactics and the way he applies different strategies. I am also learning from the other coaches as well. He’s inspired me, as well as my family, other people,” Morris said.

After beating two ranked teams in Rupp Arena last week, Kentucky has to play three of its next four games on the road in what figures to be a challenging stretch. However, Washington says road play is not that bad.

“We just get fired up when playing on the road. We just beat three ranked teams in a row. I feel like our team is on the rise and I’m excited about it. I’m just ready to go play wherever.”

Calipari said his team might have played its two best back-to-back games earlier this season in road wins at Georgia and Auburn.

“It’s tough on the road but that doesn’t mean you can’t win,” freshman guard Ashton Hagans said. “Plus, we know everywhere we go what the environment is going to be like. We are used to it and that might actually give us an advantage.”

Senior gymnast Alex Hyland, one of only six UK gymnasts ever to have earned All-American honors, is from Foxborough, Mass., and naturally will be pulling for the New England Patriots in Sunday’s Super Bowl against the Los Angeles Rams.

“I live like a two-minute walk to the (New England) stadium, so I have always been a fan,” Hyland said. “I have only been to a few games, though, because tickets are so expensive.”

She normally wears only Kentucky gear in Lexington even though she has New England Patriots sweatshirts. She says the Patriots are not a popular team in the Bluegrass.

“If you are not a Patriots fan, people don’t seem to like them. That’s why I just stick to my Kentucky gear when I am here in Kentucky,” she said. “But anyone who knows me knows who I will be for in the Super Bowl. It’s all Patriots.”

Quote of the Week: “People can say what they want to and make a big deal out of a lot, which sometimes they do. But the bottom line is that he’s done a ridiculously good job wherever he’s been. He gets so much credit for being a terrific recruiter, but he’s as good of a coach as he is a recruiter,” Kansas coach Bill Self on UK coach John Calipari.

Quote of the Week 2: “We have one of the best AD’s in the country. He understands sports and understands scheduling. I could get a schedule with 45 wins because I make the schedule. But to get to the level we want I have to make sure we go up against the best and our AD gets that,” UK softball coach Rachel Lawson on athletics director Mitch Barnhart.

Quote of the Week 3: “He puts a lot of pressure on the ball handler, so the ball handler doesn’t have as much time to think and react to the pass they want to make. So, not just me, but a lot of the other guys anticipate and get into the passing lanes,” UK freshman Tyler Herro on the Ashton Hagans’ defense.