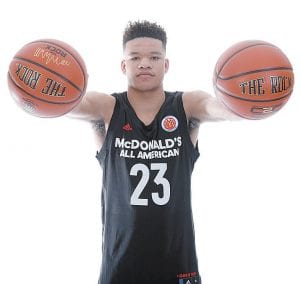 Kevin Knox was a standout high school quarterback before deciding to concentrate only on football. (McDonald’s All-American Photo)

Kevin Knox Sr. was a football player at Florida State University and thought for many years that his son, Kevin Jr., might be an even better college football player than he was.

Kevin Knox Jr. was a quarterback who could throw the ball 85 yards in the air, according to his father.

Others had told him his son was destined to be a special college basketball player.

“If somebody is maybe going to offer a college scholarship, we wanted to have our options open,” Kevin Knox Sr. said. “He played both sports and we just waited to see whether he would be blessed to be good enough for a college scholarship or not. He was a starting quarterback his sophomore year in high school and an ESPN top 150 player.

“But his upside was even more for basketball at 15 than it was for football. We talked about it, prayed about it and came up with the decision best for him (to just play basketball). We feel now even at 17, he’s only been playing basketball full time about 1-1/2 years. When you say the sky is the limit for him, it can get scary.”

Not for Kentucky. The versatile Knox Jr., one of the top 10 players in the 2017 recruiting class, is headed to Kentucky, and enhancing his chance to play in the NBA was a significant reason that Knox thought Kentucky was the right place to play his college basketball. Kevin Knox Sr. said the ESPN 30 for 30 documentary, “One and Not Done,” on John Calipari took a look at how the UK coaching staff prepares players for the next level.

“I told my son we are going to go to college and the reason we all go is to get an education so we can make more money,” Knox Sr. said.

He noted how college graduates make more money normally than non-graduates just like those with a Master’s degree make even more and a doctorate usually brings even more money. 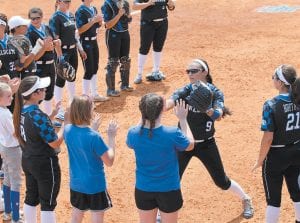 Buzz Ray said coach Rachel Lawson had to keep her composure in the Super Regional to keep the team together. (Vicky Graff Photo)

“You are going to college to make money,” Knox Sr. said. “If the opportunity presents itself to make more money after year one (in the NBA), why not go do it. How long would it take to make $2 million (for a normal college graduate)? We can go back and finish the education.

“Just because you might have the opportunity to go early to the NBA and God gave you a certain set of skills does not mean that you do not go back to college. Shaq (Shaquille O’Neal) made millions, more than he could ever spend. He went back to get his degree. We are going to get our degree.”

Knox Sr. said every school recruiting his son told him he had a lifetime scholarship, something Calipari stresses. If Knox Jr. plays 10 years in the NBA and manages his money, his father said he could go finish his degree then.

“Every offseason we plan to take two or three classes online if he does go to the NBA,” Knox Sr. said.

Knox’s father said the family saw all the speculation about which school was best for Knox Jr. and why. Their only interest was which school they felt would develop the player the best.

“Coach Cal had a vision for Kevin to play the guard position,” Knox Sr. said. “Everybody told us Kentucky had too many All-Americans, too many five-star players. We never looked at that because even with all the players Kentucky was bringing in, all the coaches told us the same thing — there is not a 6-9 kid who can dribble like a guard, rebound like a power forward and shoot like a shooting guard like Kevin can.”

It also didn’t hurt that Knox Jr. had played in all-star games with and against many of UK’s incoming players for years and had a solid relationship with many of them.

“You play on the circuit with those guys and get invited to things other normal kids might not get to do,” Knox Sr. said. “We got a chance to know elite kids. But overall we just felt the University of Kentucky brought something to the table that others could not match.”

Only five NFL players had 30 or more targeted passes in 2016 without dropping a single one — and two were former Kentucky players.

Randall Cobb of Green Bay was targeted 80 times with 60 catchable targets without a drop. That was the best total in the NFL.

The other former Wildcat? None other than Jacob Tamme, who remains a free agent after having 30 balls thrown his way last season and did not have a drop among his 22 catchable balls before his season was ended with an injury.

Two of Tamme’s Atlanta teammates (Aldrick Robinson, 20 catchable, and Justin Hardy, 21 catchable) also did not drop a pass. Houston’s Lamar Miller was the other player with no drops among his 36 targeted passes.

Southeastern Conference basketball will have eight players ranked in the top 25 of this 2017 ESPN recruiting class next season.

That’s good news for the SEC — except that all but three of the players are from Kentucky.

Former Kentucky All- American Derek Abney had plenty of Kentucky connections when he chose to play for coach Hal Mumme.

His father, Larry, grew up in Winchester. His mother, Sylvia, was from Frankfort. His grandmother lived in Frankfort and other relatives also lived in Kentucky.

His parents actually met at Georgetown College — but not in a traditional way.

“The first time they met, she hit him with a car,” Abney said.

“He was in the crosswalk and she was backing up in the car. She never saw him. He got pinned between her car and another car,” Abney said. “He ended up in the hospital and she came to visit him.

“My dad, in typical fashion, told her, ‘Lady, if you wanted my (phone) number, you just had to ask.’ So that was how they met.”

Abney also met his wife in a bit of an unusual way. He was a seventh-round draft pick of the Baltimore Ravens and after never missing a high school or college game due to an injury, he got hurt on the first play of his NFL career.

“That night I was out and my arm was in a sling,” he said. “I happened to meet my future wife at a bar. We were like two peas in a pod. Obviously, it was a strange night for me. It went from my future being bleak for football to spending somebody I would be spending the rest of my life with.”

Uncertainty continues to plague the USA under-19 team scheduled to be coached by John Calipari and play in Egypt the first week of July.

USA Basketball twice delayed announcing players invited to the tryouts because of terrorist incident overseas, including one in Egypt.

Paul Washington Sr. said his son, PJ, likely will go to the tryouts in Colorado Springs but it is still “day to day” what he will do if he makes the team.

Earlier Robert Vanderbilt said his son, Jarred, would not be on the team because of safety concerns.

Remember that illegal pitch called against Kentucky’s Meagan Prince in the Super Regional at Oregon that let the Ducks score a run and started the comeback from a 5-0 deficit that ended UK’s season.

Not much has been said about the call — which UK fans, players and coaches clearly did not like — since the game. So I asked senior outfielder Buzz Ray what she thought of the call. Here is her tactful answer:

“Normally you get a warning call from the umpire. I was a little surprised there was not a warning before it happened,” Ray said. “I was in right field, so I could not really see what happened so I cannot say a lot. But Meagan did not think it was the right call. I know that. It was a big deal when it happened. But at that point, I still felt we were in good shape. Still, it was frustrating not to even get a warning call.”

Several close calls also went against UK in that game. Coach Rachel Lawson might not have been happy, but she never lost her composure.

“I think she did a great job keeping her poise,” Ray said. “She had to stay calm for us. If she had lost it or got too excited, we would not have produced like we should. But I am guessing there were times she was not really happy.”

Quote of the Week: “I told their president I’ll stay more than three minutes this time. It’s packed. It’s a great environment,” John Calipari on playing at South Carolina, where he has been ejected the last two times UK has played there.