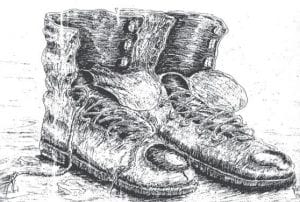 Daddy’s coal mining boots once smelled like new leather. I watched him take them out of the box and try them on. He walked around the house in them all day. “I’ve got to break them in,” he said.

He wore them to work in the Marlowe mine the next day, and all the newness was gone 10 hours later when he wore them home. They were scratched, scuffed, cut, dirty and smelled like coal dust. I took them outside and with a whisk-broom, swept off all the black mud I could.

After his bath, Mama put Band-Aids on all the new blisters on his feet. The boots sat beside the fireplace all night, so they would be warm for his milelong march with the other miners to the mine the next morning.

During his lifetime, Daddy’s boots took a lot of punishment while the steel toes protected his feet. I’ve seen him come home during the cold winter months, and he couldn’t get his boots off until he thawed them out while sitting close to the fireplace. He said he had worked in knee-deep water all day. During his long walk home, his boots had frozen to his feet, and his pants to his legs. Mama would rub his legs to get the blood circulating again.

The boots were dried by the fireplace, steam rising from them, and I turned them from time to time. Metal stretchers were put into them, so they would keep their shape while they dried.

Daddy only had one pair of work boots, and no spares. The soles came off his old ones, and Mr. Morton, at his shoe repair shop in Whitesburg, said that they couldn’t be repaired.

Since they were so expensive, about $12 a pair, those boots had to last him a full year in the mines. The rest of us kids got a new pair of Red Goose shoes in August each year. These were for school and church wear only.

Daddy’s boots were wellcared for, and they lasted him a long time. Before he bought himself a new pair, the leather on the toes was gone and the steel plate was rusted. I played in them until they fell apart.