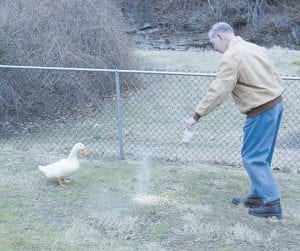 FAITHFUL FRIEND – Former Whitesburg Mayor Nathan Baker feeds “Daffy,” a duck that has shown no desire to leave the area no matter the temperature. (Photo by Sally Barto)

There’s one duck in Whitesburg that has a lot to quack about.

Daffy was lucky enough to have been bought at a pet shop for a couple of dollars last Easter by Nathan and Lois Baker’s nineteen-yearold granddaughter, Amber Adams. Adams’s mother wouldn’t let her keep the duckling so she took it to her grandparents’ house.

Nathan Baker, former mayor of Whitesburg, kept the little duckling in his basement until the duck grew big enough to endure the outdoors. Baker didn’t know the animal would come to be his pet.

“I set it out in the yard after a couple of months and it has been there ever since,” said Baker. “He never tries to fly away.”

Daffy spends his days waddling happily all over the Bakers’ yard. He can also be found in his house, which consists of a doghouse that has a cloth doormat and 100-watt light bulb so the duck can stay warm in the wintertime.

“He goes in there when it is raining or is real cool,” said Baker.

On really cold days Baker takes a pan and fills it with warm water. 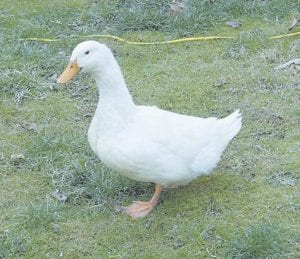 “Daffy” the duck likes it when other ducks come around, but never makes any effort to leave with them.

“I’ll bring out some warm water. It will jump in there and take a bath in that water,” said Baker.

Baker said Daffy, who is his first pet duck, will only eat corn.

When Daffy sits down Baker knows that the duck wants to be petted.

“I’m the only one that fools with him,” said Baker.

Although Daffy never leaves the Bakers’ yard, he interacts with other ducks. Baker said Daffy gets excited when ducks land near the Bakers’ house, which is located close to the Kentucky River.

“He loves to see them coming. You can hear him hollering. It makes him happy to see them,” said Baker.