Dale Jr. gives a lesson to all in perserverance 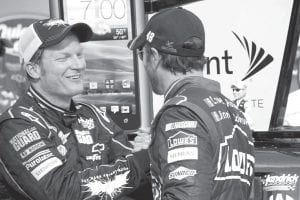 OK, it’s just one win. The first in four years, no less.

But there is a level of importance to Earnhardt snapping his 143-race losing streak that goes beyond the immediate boost to NASCAR, which has been starving of late for any sort of scintillating story line unrelated to another Kurt Busch meltdown.

What Earnhardt did Sunday at Michigan International Speedway was a lesson in perseverance, and a teachable moment for parents everywhere. Earnhardt proved that you can hit rock bottom and rise again.

Some may roll their eyes at this point, perhaps even snicker at the notion that Earnhardt has ever had it very rough. He’s rich, has a secure sponsorship and rock-solid job security with Rick Hendrick, the most powerful owner in NASCAR.

He also has a very famous last name, an enormous fan base and is the one driver who can absolutely move the needle for NASCAR. It’s a lot of pressure to carry around 11 months a year, particularly when stuck in a neverending slump.

It wasn’t just a slump, either. There have been stretches since 2008 where Earnhardt simply wasn’t very good. The first came in 2009, when his five top-10 finishes tied the career-low set in his 2000 rookie season. But he won two races and the All-Star event that first year, and with it came a bravado that overshadowed the on-track inconsistency.

So 2009 was unlike any other season for NASCAR’s most popular driver, and the hole he fell into was so deep that it took him until Sunday to finally climb out. That season snowballed on him, and tension with cousin Tony Eury Jr. had reached its breaking point by Memorial Day, when Earnhardt quietly slipped in a side door for the driver meeting and stood off to the side among the fans rather than sit with his crew chief.

Earnhardt finished 40th in the Coca-Cola 600, and Hendrick pulled the trigger a few days later with a much-needed divorce that both Earnhardt and Eury were too emotionally invested to realize themselves.

A month later, with new crew chief Lance McGrew, he was able to see the toll it had taken.

“I can’t have another year like this. I can’t mentally. I can’t physically. I don’t want to put the people around me through this,” Earnhardt told The Associated Press in a June 2009 interview. “When we were really, really struggling, everybody in the family was upset. Crying and carrying on. All the women were crying, the men were cussing. I’m serious. This is our family, Eurys and Earnhardts, racing is our life and it wears on all of them. We can’t put anybody through this (stuff ) again. We’ve got to get this right.”

The relationship was made right, but the performance didn’t improve.

Part of that was because Earnhardt’s confidence was totally shattered. While he was sputtering along, teammates Jimmie Johnson, Mark Martin and Jeff Gordon combined to win 13 times and finish 1-2-3 in the championship race. No matter how good Earnhardt may be at tuning out the critics, it couldn’t have been easy to look in the mirror when his teammates were proving there was nothing wrong with the equipment.

And no matter how hard he tried, Earnhardt couldn’t make the relationship with McGrew take off. Earnhardt understands his crew chief is subjected to intense scrutiny from the JR Nation fan club, and he tried to deflect some of it. But as the losses mounted, the vitriol increased, and Hendrick again made a change at the end of the 2010 season.

Next up was Steve Letarte, who had shouldered more than his share of venom as Gordon’s longtime crew chief. Nobody knew if he could actually pick Earnhardt back up and coach him back to Victory Lane, but that’s the genius of Hendrick, who realized Earnhardt desperately needed someone to restore his confidence. Letarte played the cheerleader role to perfection, and although Earnhardt didn’t win last season, he improved his top-fives and top- 10s, and returned to the Chase for the Sprint Cup championship for the first time since 2008.

It set the stage for this season. Through 15 races, Earnhardt has matched his top-10s from last season, improved his top-fives (he has six after four last year) and his 218 laps led are his most since 2008.

The turnaround is so impressive that Earnhardt — the guy who just snapped a four-year losing streak — is suddenly considered a viable championship contender.

That’s what happens when you don’t quit, or bow to the pressure. Earnhardt could have made a pretty nice fortune running around in 15th or so for the rest of his career, collecting paychecks and trophies as the most popular driver.

Instead, he bought into whatever Letarte sold him at the start of 2011. So what if Earnhardt never wins a Sprint Cup championship? It won’t be for lack of trying.