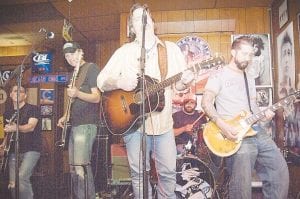 A Louisville band which promises “something for everybody” will perform in concert Saturday at Summit City in Whitesburg.

Dallas Alice takes its name from the lyrics of Little Feat’s classic tune “Willin'” and plays a mixture of originals and well-known covers.

The band’s influences range from Steve Earle and Uncle Tupelo to the Clash and Social Distortion to Townes Van Zandt and Tom T. Hall.

The band’s first album, “Social,” was released in 2006. Dallas Alice released a second album, which is self-titled, in May.

For an idea of how the band’s original tunes sound, visit www.myspace.com/ dallasalicerocks.

Admission to Dallas Alice’s July 25 show is $5. Opening the show will be Kent Colwell and friends of Hazard. Dallas Alice is expected to take the stage at 9 p.m.