‘Dallas’ returns to its home

By JAMIE STENGLE The Associated Press 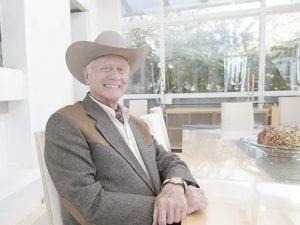 Actor Larry Hagman smiled during an interview on location during the filming for the upcoming new series “Dallas” in Dallas. (AP Photo)

With Larry Hagman reprising his role as the conniving Texas oilman, filming is underway at locations all over the city for TNT’s new television series “Dallas,” which will also see the return of Patrick Duffy as J.R.’s brother Bobby and Linda Gray as J.R.’s ex-wife Sue Ellen, along with a new generation of Ewings.

And, of course, the spotlight also returns to the city itself, with its distinctive skyline rising from the prairie.

“We’re trying to give the show a real sense of place and Dallas has a real personality,” said location manager John Patterson, adding, “It’s a city that does things in a big way. That’s part of J.R. and part of what we try to give the show — a sense of the city, which is big, very well done, shiny, new and looking toward the future.”

TNT has ordered 10 episodes of the series, set to air in summer 2012. Filming for the series, entirely shot in Dallas, began mid- October and is expected to wrap in late January.

“There was just no way we were going to film anywhere else,” said executive producer Cynthia Cidre, who also wrote the pilot for the new series, a “mix of the old world and the new world.”

The original series, which aired from 1978 to 1991, enjoyed popularity around the world as viewers tuned in to watch the scheming Ewing family. As the plot twisted and turned season after season, the series contributed to some of TV’s most memorable moments. After Bobby died in a season cliff- hanger in 1985 after being hit by a car, the entire next season was revealed to have been a prolonged dream sequence when his former wife, with whom he had reconciled, wakes up to find him alive, taking a shower. The 1986-87 season then marked Duffy’s return to the cast after a yearlong absence.

And, of course, there was the cliffhanger in 1980 that left the whole world in suspense. The catchphrase “ Who shot J. R.?” became part of the common ver- nacular as viewers waited to find out who had fired on J.R. When viewers tuned in for the answer on Nov. 21, 1980, the shooter was revealed to be J.R.’s vengeful mistress, who was also his sisterin law. That episode was seen by more people than any TV program in history until that time.

“ That phrase. I don’t think there’s a country in this world that you could find someone who doesn’t know what that is. And it all goes back to ‘Dallas,’” said Josh Henderson, who plays J.R. and Sue Ellen’s son, John Ross.

Henderson, who was born in Dallas and spent part of his childhood here, said that working with Hagman has been a little surreal.

“I find myself sometimes just looking at him sometimes going, ‘Wow, this is really happening. This is really ‘Dallas’ again and I’m really kind of family and kin to the J.R.,” Henderson said.

Hagman, who said returning to Dallas to film the legendary show again has been like “coming home,” says that this time out, the plots are even more complicated.

“Everybody’s double-dealing here. I mean everybody,” he said.

Hagman, who turned 80 in September, announced in October that he has been diagnosed with “a very common and treatable form” of cancer but still planned to continue work on the reboot of “Dallas.” Hagman underwent a liver transplant in the mid-1990s.

Filming a scene this fall, it’s apparent that J.R. has lost none of his swagger. After striding into a sleekly designed Dallas home in his Western blazer and cowboy boots, he sits down and begins deal-making.

“The best way to understand a man is to talk to his friends and his enemies,” J.R. says. “My friends are in the statehouse. My enemies are going to be harder to find.”

The actors rounding out the new generation are: Jesse Metcalfe as Bobby’s adopted son, Christopher Ewing; Julie Gonzalo as Christopher’s fiancee, Rebecca Sutter; and Jordana Brewster as Elena Ramos, daughter of the cook at the Ewing family’s Southfork Ranch who grew up to become a geologist and is John Ross’ girlfriend and former love of Christopher.

Dallas Film Commissioner Janis Burklund said that the series’ value to the city has been immeasurable — making it known to people around the world.

“Now I feel like we’ve gotten sort of got hit by lightning twice to have another shot at this iconic show coming back,” Burklund said.