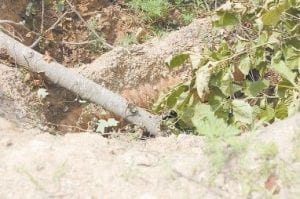 GAS LINE TO BLAME? Craft’s Colly resident Danny Collins says there was no problem with a silt pond on Company Branch at Craft’s Colly until a gas company laid a four-inch line across the dam. (Eagle photo)

A water dam specialist with the state Division of Water is scheduled to inspect an old silt pond on Company Branch at Craft’s Colly this week after county officials declared a state of emergency over fears the dam might collapse.

An overflow culvert located near the center of the dam, estimated to hold six-million gallons of water, stopped up on June 19 and caused water to erode the dam.

“Had we gotten the amount of rain like we did at Neon it could have broken loose,” said Letcher County Judge/Executive Jim Ward.

Ward said county employees worked all through Friday night digging a spillway to let water come out the side of the dam.

Ward said workers removed a foot of dirt at a time to gradually lower the water level.

“We tried to get the water down below where it breached, taking away the damage,” said Ward. “We worked all night on it to make sure everything was alright. It appears to be stable now.”

Ward said the landowner, J. Mark Adams of Ashland, has been told to address the situation.

Ward is waiting for the dam specialist to say what further actions need to be taken by the state and county.

“We are monitoring it about three times a day now,” said Ward. “We are waiting for the Division of Water to let us know what else to do.”