Dam is cause for concern, not panic 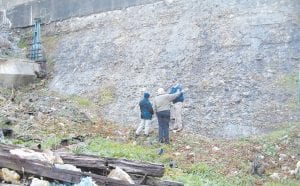 State and local officials are conducting tests on the dam at Elkhorn Lake in Jenkins to determine if the recent 4.3 magnitude earthquake centered in Blackey has enlarged the flow of a small stream at the bottom of the dam. Above, inspectors from the Kentucky Division of Environmental Protection joined Jenkins city officials and engineer Paul Nesbitt for an inspection on November 16 after Nesbitt found that the small stream running below the dam has grown to be 10 times larger than it was five years ago. Nesbitt said the situation is not a cause for panic. “All dams leak,” said Nesbitt. “But this is not a slight change. It’s 10 times the flow. I’m not saying to evacuate, but it’s a concern.” Officials will determine what steps, if any, need to be taken after testing is complete. (Photo by William Farley)