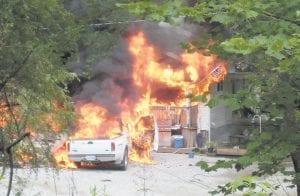 A fire which began in a recreational vehicle Sunday also burned a pickup truck and part of a house on Garner Mountain, near Isom, before it could be extinguished. Passersby tried but were unable to extinguish the flames, which eventually spread to the truck and house before a fire truck was able to arrive. A spokesman for the Letcher Volunteer Fire Department said volunteers were notified about the fire at 2:40 p.m., and arrived at the house, which belongs to Norman Bradley, at 3 p.m. A bathroom and kitchen were destroyed, but several pieces of furniture and other items were salvaged.