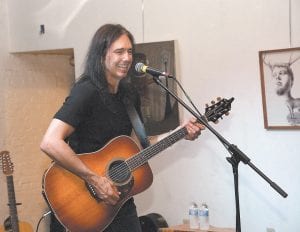 A PERFORMANCE WORTH SMILING ABOUT — Damon Johnson, who has written songs for Santana and other stars and played guitar with Alice Cooper and Thin Lizzy, smiled while sharing a light moment with audience members who saw him perform for more than two hours at Summit City in Whitesburg on May 10. In addition to playing and singing several of his original tunes, Johnson also covered songs by Jimi Hendrix, Bruce Springsteen, Merle Haggard and others. (Photo by Tom Biggs)

It doesn’t come as too much of a surprise that a top-flight musician who has written songs for Santana and Fleetwood Mac’s Stevie Nicks and played guitar for artists as diverse as Alice Cooper and Faith Hill would be able to perform one of the most amazing sets of music one could ever expect to see and hear in a solo acoustic show. But when the performance takes place in a town as small as Whitesburg, costs only $12.50 to see, and lasts more than two hours, it makes it even that much better.

To say that guitarist and singersongwriter Damon Johnson did not disappoint in his well-attended show at Summit City would be an understatement. Had the 49-year-old Alabama native performed only the songs he wrote and sang for the hard rock band Brother Cane in the 1990s or a few from his solo albums Dust (2000) and Release (2010), it’s hard to imagine that anyone would have gone home disappointed, even those who traveled to Letcher County from states as far away as Maryland.

But Johnson did much more. Not only were his Brother Cane songs (“Got No Shame” and “Hard Act to Follow”) and his solo albums represented (“Dayton, Ohio,” “Release,” and “Pontiac”), Johnson also performed the song he wrote for Santana’s All That I Am album (“Just Feel Better”). In addition, he displayed his amazing diversity by covering Merle Haggard’s “Workin’ Man Blues,” Bob Dylan’s “Girl From the North Country,” Steve Earle’s “Feel Alright,” and the late Townes Van Zandt’s “Lungs.”

If those songs proved a little too country for some in the crowd, which was highly unlikely, Johnson answered with two rockers made popular by the Irish band Thin Lizzy, for whom he now plays guitar (“Jailbreak” and “The Boys Are Back in Town”), as well as Thin Lizzy’s ballad “I’m Still In Love With You,” which he performed in the style of British rhythm and blues singer Sade on her 2011 greatest hits album, The Ultimate Collection.

If all that wasn’t enough, Johnson also covered Ray LaMontagne’s modern- day classic “Jolene,” a song for which Johnson said he and his wife named their daughter, Jimi Hendrix’s “Little Wing,” Alice Cooper’s “I’m Eighteen,” which he performed with Leslie County native Steve Sizemore, and Lynyrd Skynyrd’s “The Needle & The Spoon.” He closed the show with Bruce Springsteen’s “Born to Run.”

Among the other highlights of Johnson’s Friday night performance was his rendition of “Bound for Glory,” a song he and other current members of Thin Lizzy have recorded and will release under the moniker Black Star Riders, whose debut album All Hell Breaks Loose is set for release May 21.