Dan Aykroyd is smarter than the average bear as ‘Yogi’ 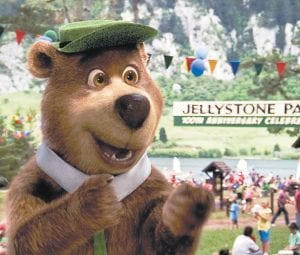 Dan Aykroyd has been rehearsing for the lead voice in “Yogi Bear” for half a century.

Aykroyd, whose killer vocal impersonations on “Saturday Night Live” included Jimmy Carter, Richard Nixon and Robert Stack’s Eliot Ness of “The Untouchables,” was doing Yogi in childhood, when the smarter-than-your-average bear provided solace after a long school day in the arctic Canadian winter.

Chatting about his role in the live-action, computer-animation combo that features Justin Timberlake providing the voice of sidekick Boo Boo, Aykroyd recalls in vivid detail his devotion to Yogi — down to the call letters of the Ottawa TV station on which he watched the cartoon as a boy in Hull, Quebec.

Aykroyd, 58, recounts how at age 8 or 9, he would leave home at 7 a.m. zipped up in a snowsuit, walk past a den of timberwolves, scramble over a stand of greasy cut timber, cross a frozen river (sometimes falling in) and race across a highway in a bad neighborhood to his school. 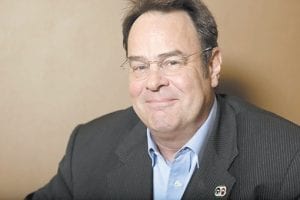 Then the real fun would begin.

“I would get my books thrown around, and people would beat me up. I’d go in, I’d have to take my pants off and put them on the radiator in front of all the girls in class because I was frozen,” Aykroyd said in an interview to promote “Yogi Bear,” which hits theaters Friday. “Then I’d have to, at 3 in the afternoon, leave and do the whole thing again and go back.

“So when I got home, with the twilight, the light fading at 4 o’clock in Hull, Quebec, Canada, in February, March, believe me, the only warmth was Yogi Bear. My brother and I would immediately turn on the TV coming home from school and sit there and watch Yogi, when my mother didn’t catch us. My mother thought that cartoons and things like ‘The Untouchables’ were beneath us.”

“Yogi Bear” director Eric Brevig said the role was Aykroyd’s as soon as he came in to audition and nailed the nuances of Yogi, whose big, goofy voice on the 1960s cartoon was inspired by Art Carney’s Ed Norton on “The Honeymooners.”

“Dan’s been doing Yogi Bear for 40 years,” Brevig said. “Dan’s version isn’t actually identical. You can’t hear them side by side, so you don’t recognize it. I didn’t want them to imitate the characters. I wanted them to be the characters as you remember it, especially people who know the characters from their childhood. You know, ‘There’s that old friend I had when I was a kid.’”

Aykroyd, who hopes to reunite with Bill Murray, Sigourney Weaver, Harold Ramis and other collaborators for a third installment in their “Ghostbusters” franchise, has had the broadest movie career of the original “SNL” cast, which included his comedy partner John Belushi, who died of a drug overdose in 1982.

“SNL” co-star Chevy Chase, with whom Aykroyd co-starred in “Spies Like Us,” ‘’Caddyshack II” and Aykroyd’s disastrous directing debut “Nothing But Trouble,” had bigger success early on in bigscreen comedy.

But Aykroyd and Belushi turned one of their “SNL” creations into a comedy epic with 1980’s “The Blues Brothers.”

Aykroyd went on to score a blockbuster with 1984’s “Ghostbusters,” which remains one of the top-grossing comedies ever and was followed by “Ghostbusters II” in 1989. He and Ramis had written the original movie for Belushi, whose role was inherited by Murray, Chase’s replacement when he left “SNL.”

With the sequel “Blues Brothers 2000,” his House of Blues clubs and tours alongside Jim Belushi substituting for his late brother, Aykroyd has kept the spirit of his old comedy soul mate alive.

“I miss him every day, and I miss him every time I walk into these magnificent House of Blues that we built. Blues palaces, I mean, God, he would have just loved that,” Aykroyd said.

Aykroyd has remained a team player, partnering with Eddie Murphy on “Trading Places,” Tom Hanks on “Dragnet,” Steve Martin on “Sgt. Bilko” and “SNL co-star Jane Curtin on “The Coneheads.” He branched into dramatic roles with such films as “Chaplin” and “Driving Miss Daisy,” which earned him a supporting-actor nomination at the Academy Awards.

Mostly a supporting player over the past decade, Aykroyd will play second banana again to Murray if “Ghostbusters III” gets off the ground. The goal is to freshen up the franchise with younger cast members.

“The whole idea is to hand the torch off to the new generation, because we are physically infirm,” Aykroyd said. “We’re all wheezing wrecks. We can’t lift these packs up and run around like we used to. We need new blood. We need new boots on the ground, as it were, and that’s what the new players will furnish us.”

Given all of his side interests, which include a winery and a vodka brand called Crystal Head, Aykroyd is very specific about what he’s looking for in acting jobs.

Though he admires talented new filmmakers, he said he will not work on low-budget independent films with untested directors. It has to be established filmmakers who can afford to pay him.

“I will walk out the door for the paycheck I deserve and working with the superstars. Otherwise, I won’t work as an actor,” Aykroyd said. “I’m sorry. I don’t have to, and why shouldn’t I get what is commensurate with what my market will bear today? It’s not the salary I used to get, and I don’t care if I play a supporting part. Fine. I’m reasonable. …

While Aykroyd had to watch Yogi and “The Untouchables” behind his mother’s back as a boy, he was able to razz her in his “SNL” era impersonating Stack’s Ness and now can do the same with Yogi.