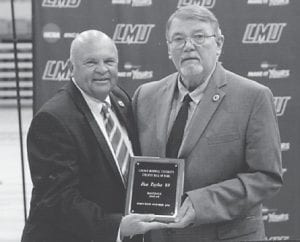 Dan Taylor, of Isom, was inducted into the Lincoln Memorial University’s Athlete’s Hall of Fame at Harrogate, Tenn., on October 8. Taylor is the first to represent his class of 1969 in LMU’s Hall of Fame.

Playing for Dean C. Bailey, Taylor was a pitcher on the teams of the 1990s that had an average of 13 players on the roster. Taylor was the first freshman to pitch his team to two consecutive wins over conference rival Carson- Newman. He was named to the All-VSAC team. In addition to baseball, Taylor played basketball for two seasons.

Following graduation from LMU with a bachelor of science degree in health and physical education, he received a master of arts degree from Morehead State University in 1977. He spent a number of years as a coach and teacher in the Letcher County school system, and was inducted into the Letcher County Sports Hall of Fame in 1985. He and his wife, Evelyn, have four children and nine grandchildren.

“This is the most precious and prestigious moment of my athletic career,” said Taylor. “It has been a dream come true and one that my family and I will cherish for the rest of our lives.”