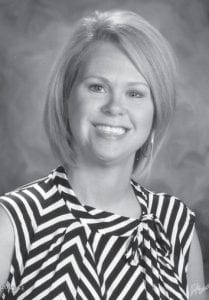 Letcher County native Dana Laura Mullins Green has been named Teacher of the Year at Lamar School in Washington County, Tenn., where she teaches second grade.

Green is a 1986 graduate of Fleming-Neon Elementary School where she was graduated with a 4.0 grade point average for eight years and was valedictorian of her class. While attending Fleming-Neon High School, she received a number of academic awards and was listed in “Who’s Who Among American High School Students”. She was graduated from high school in 1990 with a 3.9 grade point average and ranked third in her class.

She received a region honors I tuition scholarship from Morehead State University as well as an alumni scholarship and a Leadership Award scholarship, which she maintained for four years.

She was also a member of the Gamma Beta Phi Society and Pi Sigma Alpha National Political Science Honor Society.

Green received a master of arts in teaching from East Tennessee State University in 1998, graduating with a 3.9 grade point average.

Green lives in Johnson City, Tenn., with her husband Kent and daughters Macie Ellyn and Kenley Danielle. She is the daughter of Danny and Donna Warf Mullins of Cromona.