By MESFIN FEKADU
The Associated Press 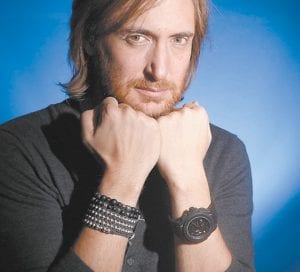 In the past, if you wanted to listen to a thumping, European-flavored dance jam on the radio, you waited for that Friday or Saturday night club mix.

Today, you can shake your body on that 7 a.m. drive to work.

Dance and electronic music, part of the fringe just a few years ago, now dominates Top 40 radio, and the culture continues to sprout at festivals as DJ-producers begin to take center stage.

David Guetta, Calvin Harris, RedOne and Sandy Vee are the top masterminds behind multiple hits on the charts, and are heavily sought out by A-list singers for some of their musical magic.

Lady Gaga came on the scene with electro- jamming hits, as did Ke$ha, LMFAO and La Roux. There are many more who have blazed the charts by adopting the electronic dance sound, including Rihanna, Usher, Britney Spears, Katy Perry, Flo Rida, Chris Brown, Pitbull, the Black Eyed Peas, Diddy and Taio Cruz, all while DJ-producers like Benny Benassi, Afrojack, Avicii and DJ Frank E gain momentum and get calls to produce hits.

“Every pop artist is taking that direction now (and) it’s the new standard of pop music,” Guetta said in a recent interview. “ You still have some dirty, crazy underground beats that are only for clubs, and then you have that crossover genre that started two years ago … and it’s just exploding.”

Guetta made noise in the music world when his song “When Love Takes Over” with Kelly Rowland became an international smash. It topped the charts in several countries in mid-2009, but it only peaked at No. 76 on Billboard’s Hot 100 chart. Then he produced the Black Eyed Peas’ No. 1 sensation “I Gotta Feeling” and it helped Guetta conquer America.

Now, the French-born DJ-producer has two Grammy Awards and six top 40 hits on the Billboard Hot 100 chart, including three in the top five. His latest album, “Nothing but the Beat” features Usher, Nicki Minaj, Lil Wayne, Jennifer Hudson and Snoop Dogg, among others.

“ Techno was born in Detroit and house in Chicago and New York, then it came to Europe and now it’s coming back to America. It came back really late here, but when (Americans) do something, (they) do it big,” Guetta said. “America is finally embracing the electronic culture.”

Lady Gaga has talked about how she struggled early in her career with her dance music sound because it wasn’t popular. She had her breakthrough in 2008 with electronic-tinged hits like “Poker Face” to “Just Dance,” helping usher in a new dance music phase in pop.

Rihanna is another artist who has topped the charts with dance-flavored gems. Her latest No. 1 tune, “We Found Love,” was written and produced by Calvin Harris, the London-based singer and DJ. Now he has his own song, “ Feels So Close,” which is currently a top 20 hit on the Billboard chart.

David Waxman, the general manager for the dance label Ultra Records — the home to acts like Harris, Deadmau5 and Tiesto — says when multiple dance tracks got play on the radio simultaneously, the genre exploded commercially.

“It’s only radio that’s trying to catch on with what’s happening,” said Waxman, who is also a DJ and producer. “Radio used to dictate, and now it’s not. Now the people are really kind of dictating what radio is playing … and it has to be embraced by radio.”