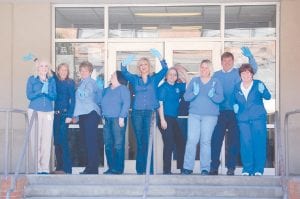 If you drove through downtown Whitesburg on Friday afternoon and saw people dancing while wearing blue gloves, did you wonder why? Did it get your attention?

Nell Fields, project manager with Faith Moves Mountains, decided that March 5, which was designated National Dress in Blue Day as a part of Colon Cancer Awareness Month, could serve as an opportunity to get community members involved in raising awareness of colon cancer and the importance of early colorectal screenings.

“Colon cancer is the second leading cause of cancer deaths in the U.S.,” said Fields, whose office is located on Main Street in Whitesburg.

Fields said if colon cancer is detected early, it is curable.

She contacted several businesses and organizations in Whitesburg and asked for people to participate in a video project to promote early screenings.

Fields said the goal of the video project is “to just have fun with each other and support an important cause.”

She got the idea for the video by watching a fun music video on YouTube starring the staff of the Providence St. Vincent Medical Center in Portland, Ore. Employees in diff erent departments of the hospital wore pink gloves and danced to show breast cancer awareness throughout the hospital. Since the “Pink Glove Dance” was posted on You- Tube three months ago, it has been viewed more than seven million times.

Once Salyer finishes editing the video, Fields would like to put the “Blue Glove Dance” on YouTube and offer it to the American Cancer Society.

Through Faith Moves Mountains, a University of Kentucky research project, Fields is working with community churches to find out the barriers preventing people from getting screenings for colon, breast or cervical cancer. Then Fields and others working with Faith Moves Mountains will help the individual identify those barriers to get screenings and place wellness as a higher priority in their lives.