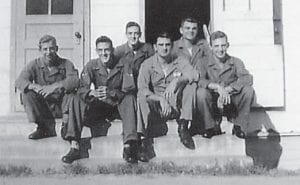 This photo was taken at Lackland Air Force Base, Texas, at the base printing department in 1950 when the Korean War started. Everett Vanover is in front of some of his men taking a break.

I was one of the first military men to be assigned to Sampson Air Base, New York, as the noncommissioned officer in charge of the base printing department. This new base was opened to train our young men for this new war. Most of my men were older than I was. I would have my 22nd birthday in a few days.

My men had a party for me and I got to dance with Patti Page that night at our NCO Club. She was the headliner that night to sing her many songs to us.

She sang her unforgettable songs “ Tennessee Waltz” and “How Much is That Doggie in the Window?” and other hits including “Mockin’bird Hill” and “ You Never Looked That Good When You Were Mine.”

She asked me to dance with her that night, and while we danced she sang “Tennessee Waltz” in my ear, the song which became the officially adopted song by the state of Tennessee. When the dance was over, she gave me a birthday kiss. This old boy had a hard time walking her back to our table. It took me a few days to come back to earth.