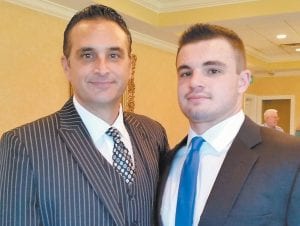 Kash Daniel, right, had his father, Scott, with him when he was named the Paul Hornung Award winner in December. Now Daniel is still adjusting to life at the University of Kentucky after graduating from high school early. (Larry Vaught/Verizon Photo)

Linebacker Kash Daniel knew playing football at Kentucky and in the Southeastern Conference would be a big adjustment. What the former Paintsville High School star did not know was just how big it would be.

“It has been challenging mentally every day to prepare yourself to go work and do everything you have to do 100 miles per hour no matter what kind of drill it is. It can be a walk through, a lift session. You better bust your tail or you will be an outcast and people will see that very clearly. Just the pace of the game is so different,” said Daniel.

He can now joke about his welcome to big-time football moment during spring practice.

“We were doing punt and I was starting at guard and my job was to block the right guy on my side. He was pretty tight, so it was not like I had to take two steps outside to block him. But he dipped his shoulder when they snapped the ball and I stepped out there and I got one hand on him and he was by me. This definitely is not Paintsville anymore,” Daniel laughed.

Daniel graduated a semester early so he could enroll at Kentucky in January to start his collegiate career. Not only has he had to adjust to football, but the academic challenge has been different.

“Just the fact in high school you had the same class for five days a week (in high school) and now I got Monday-Wednesday-Friday classes three times and then I have one on Tuesdays and Thursdays. It is just time management knowing I got this to do on this day and this on that day. Just manage your time, study the playbook and have a little free time to yourself,” Daniel said.

He’s become a recognizable figure in Lexington like many UK athletes are. That certainly does not bother him because of his outgoing personality. However, he has not let that attention change him.

“I am just a freshman here trying to make a name for myself,” Daniel said. “Those high school days are over. Everybody was used to reading (newspaper, website) articles about me. I understood that and knew coming in that there would not be a lot of articles written about me and that’s fine because I was not about that any way. I am just a normal guy.”

He was realistic about his chances for playing time as a true freshman when he arrived on campus. That has not changed.

“At the end of the day we are all one solid group that helps out each other. It is not about this is my job. You want that job more than anything, but at the end of the day you are still brothers. It is just a good family atmosphere with those guys. The competition is fierce but off the field we want to love each other,” Daniel said.

“There are so many concepts you have to learn and so many words that can mean different things in different coverages and personnel. I came in to get some early experience. I am struggling right now. Went from high school to college just like that. Hard to get everything down but I am glad I came in the spring. My teammates are good guys to be around on and off the field.”

Sporting News columnist Mike DeCourcy remains a bit perplexed about why Charles Matthews decided to transfer from Kentucky and seems destined to either be at Michigan or Xavier next season.

“I totally don’t understand Matthews. Why do you choose Kentucky if you don’t expect to compete? Yes, you’re the 30-some and thing player in the 2015 class and they’re bringing in two top-10s to compete with you for playing time. Did you really expect otherwise? It makes no sense to me to leave after a single season,” DeCourcy said.

“I understand why Marcus Lee left. He needs an opportunity to play where there’ll be less pressure on him each possession and less competition for playing time. He needs the year away to work on his skills.”

“The backcourt is not as deep, but Dominique Hawkins will merit minutes and you’ve got De’Aaron Fox, Malik Monk and Isaiah Briscoe. It’s about finding a system and rotation that works for this group, not whether the group has enough guys,” DeCourcy said.

Tai Wynyard knows coming in for a semester at Kentucky last year helped him even if he did not play in games and only practiced.

“Coming in earlier has gotten my conditioning up more. It got me to see how I can work back home. Obviously back home you don’t get that much conditioning or that kind of work,” Wynyard said.

He does hope he can help Kentucky’s inside game next season.

“I mean hopefully I have a role on this team. Everyone on this team wants a role,” Wynyard said. “The first thing in the first meeting that Coach Cal said was that none of you have been promised minutes, none of you are promised anything. It’s all just completely open.”

And what can he bring to the team?

Both ESPN draft analyst Chad Ford and Ed Isaacson of NBAdraftblog.com agree that Alex Poythress likely would have been a firstround draft pick if he had left Kentucky after his freshman season. But going into Thursday night’s draft after his senior season, some are not sure he will even be drafted.

So what happened to Poythress after his freshman year?

“Two things stand out — confidence and understanding of the game. At times as a freshman, you could see him just go out, do his thing and not overthink things, but once he made a mistake, they just seemed to snowball,” Isaacson said. “That’s okay as a freshman, but it continued to happen, until his role became so specific, there wasn’t much room for him to over think it.

“Also, he just never seemed to grasp a lot of the little concepts that made Kentucky’s offense and defense work. Individually, he had some of the skills, but he was never able to get them to translate in the bigger scheme. Of course there were other factors — his offensive skills never seemed to mature, especially his shooting ability, and the injury that took away most of his junior season, which could have been a great time for him to step up as a team leader.”

But could Poythress still work his way into the NBA and maybe play multiple years?

“If he can play great defense and hit 3’s, I think he can have a long career in the NBA,” Ford said. “It’s the question about will he be a great 3-point shooter that teams are concerned about. He shot it really well his freshman year, kind of went down from there, but I see — I watched him work out several times in L.A. I think I see the potential there for him to become that, and you can’t teach his athleticism.”

Isaacson also sees a future that could include Poythress staying in the league.

“I would say there is an excellent chance he will get multiple shots at the NBA, drafted or not, within the next five years. He still has the potential to be a good role player if he plays tough defense and hits the boards. Whether he can make the most of those chances will be seen,” Isaacson said.

“So they really have two options. One is that a lot of teams design these one-onnone workouts to extremely fatigue and stress players. They’re constantly throwing things at them and trying to confuse them, trying to wear them down, trying to get them tired, and then they want to see what is their resiliency. How do they respond to getting thrown a bunch of things at them that maybe they’re not expecting and being asked sometimes to do hard things that they’re going to fail at and then being asked to do it again and again?” Ford said.

“Some players respond to that and really take up the challenge, and other players, believe it or not, quit. You’d be shocked. Players quit, stop workouts. That’s not a good sign. You know, they’re really bad signs.”

Ford said he has no knowledge of Labissiere quitting any workouts but that teams try to have a psychological evaluation based on the workout.

“They have team sports psychologists as well as tests that they give players to try to ascertain the makeup, the mental makeup of players. It’s become a much, much bigger part of the draft process,” Ford said. “They now have a database that goes back seven, eight years, so they’re able to start to compare players with similar emotional, psychological profiles to see how they ended up handling adversity in the NBA, and as more and more data begins to come in, I think it’s going to become a more and more important tool.

“So that’s the other thing they’re scouring over is what do their sports psychologists say in their one-on-one interviews with him, how did he do on the test and trying to figure out — after maybe health.”

Despite Labissiere’s lack of production his one year at UK, Ford sees him going anywhere from 7 to 13 in the draft.

“I think many of us have projected, and I think it’s very accurate, that the Orlando Magic at 11 looks like the most likely spot for him to land. His ability to shoot the ball, to stretch the floor, to protect the rim are elite. The question is does he know how to play basketball? Does he have a feel for the game? Does he have the toughness to play in the NBA?” Ford said.

“Those are all huge questions that when you get to that portion of the draft, I think because there aren’t a lot of players left that are sure things, that most of those players are just rotation players now, you start to look at Skal and say, look, ‘If Skal hits, he could be Channing Frye.’ He might even be better than Channing Frye, and if that’s the case, he’s worth gambling, even if it ends up being that he can’t play and I think that’s why I think you’ll see Milwaukee at 10, Orlando at 11, Utah at 12 and Phoenix, who now have a second first-round pick in the lottery, just go ahead and roll the dice and gamble.”