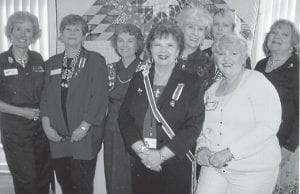 During October, the members of the Pine Mountain Chapter of the National Society Daughters of the American Revolution attended three gatherings for Hindman Settlement School.

The first meeting was primarily to educate members of the special projects particular to the new state administration.

The second meeting, also at the school, was to honor national officers as they toured each of the six schools selected by the Daughters of the American Revolution Organization to receive sponsorship. We are very fortunate to be one of these educational facilities.

was held at Keeneland Racecourse during the October meet. On this day the featured race was named the Hindman Race, and the proceeds from this race were earmarked for Hindman Settlement School’s program for children with dyslexia.

The Cowan Homemakers met at the community center with Dorothy Miles as hostess. There were 12 members and a visitor present. We enjoyed a delicious lunch and a good time as usual. We made plans to assist a family for Christmas.

The Little Cowan Primitive Baptist Church had a wonderful Thanksgiving meeting with inspiring and uplifting preaching and singing. We appreciate all the visitors who came. Chester and Verna came in from Liberty. A friend from Virginia came one night and requested prayer as he began chemotherapy Monday.

On Sunday, we were happy to have our pastor Woodrow Fields and Barbara. He had been off for surgery. It was also his birthday celebration.

Earl Profitt continues to improve and is able to attend regularly. Ella Preston is making progress and Helen Cooper is recovering from her serious injury. All these folks still need our prayers.

Robert and Sherry Brown, Bradley and Joseph came for church Sunday and visited with J.T. and Carol Caudill and Virginia Brown.