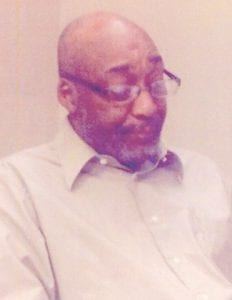 February has been designated Black History Month. Recently, the Pine Mountain Chapter of the Daughters of the American Revolution (DAR) invited the Rev. Steve Peake to speak to the group about growing up in Letcher County during the 1950s and ‘60s.

His message was interesting and information, said the DAR members, as well as allowing everyone the opportunity the discuss their experiences during the same years.

“If having it to do all over again,” said Peake, “I would change nothing,” expressing how easily the change of integration came to this area. He gave examples of the theater being divided for “whites and colored”, and how children would play together all day long, but if then they all went to the movies, they had to sit in their designated seats.

Children went to separate schools, churches, and played on separate softball teams, he said, yet were the best of friends. Peake also told how most restaurants would serve everyone, but the blacks had to eat outside except for Tucker’s Restaurant in Neon, where the black customers could sit on the stools that twirled around, play games and be served and eat inside.

The DAR meeting was conducted by Regent Marsha Banks and hosted by Rachel Breeding, Lisa Giles and Dana Richardson.