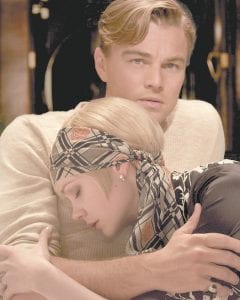 Hollywood is respecting the environment and recycling — again.

The prospect of a few dozen sequels, prequels, remakes and assorted other reworkings of familiar tales might sound tiresome until you look over the guest list studios have lined up. 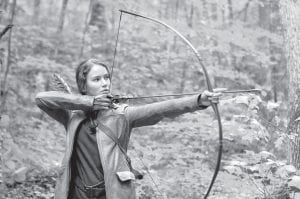 Jennifer Lawrence portrays Katniss Everdeen in a scene from “The Hunger Games,” set for release on March 23. Lawrence is among several teens fighting to the death in a televised competition in post-apocalyptic North America. (AP Photo/Lionsgate)

Add in three action flicks based on classic fairy tales and four 3-D reissues of major blockbusters, and 2012 might make good on Hollywood’s aim to lure back audiences after movie attendance last year dipped to its lowest since 1995.

Here’s a look at the year’s coming attractions:

Nicolas Cage provides a winter warm-up with “Ghost Rider: Spirit of Vengeance” (Feb. 17), returning as the bounty hunter from hell on a mission to rescue a child from the devil.

The heavy-hitters arrive this summer. First up is “The Avengers” (May 4), teaming Robert Downey Jr. as Iron Man, Chris Hemsworth as Thor, Chris Evans as Captain America, Mark Ruffalo as the Incredible Hulk, Scarlett Johansson as Black Widow and Jeremy Renner as Hawkeye.

After two “Iron Man” flicks with his billionaire inventor Tony Stark at center stage, Downey said it was an adjustment joining an ensemble.

“In his world, there are just people who satellite around him. So this was sort of a mandatory humility, and it’s definitely getting me in the right mindset for parenting,” said Downey, who’s expecting a baby with wife Susan.

Next comes “ The Amazing Spider-Man” ( July 3), with Andrew Garfield taking over as Peter Parker in director Marc Webb’s new take on how a mutant spider bite turns the gangly teen into the web-slinging hero.

“Every single human being can relate to feeling like this ordinary person that wishes they could do so much more, and what would happen if all of a sudden, you’re a skinny kid that could?” said Emma Stone, who plays Peter’s romantic interest, Gwen Stacy. “If you’ve ever been a teenager, you’ve felt like that. If you’ve ever been bullied, you’ve felt like that. I can relate to Peter Parker in so many ways.”

Then, Christian Bale returns as Batman in “The Dark Knight Rises” ( July 20), director Christopher Nolan’s third and final tale of the wealthy vigilante with all the cool gadgets. Anne Hathaway joins the cast as Catwoman.

After the late Heath Ledger’s Academy Award-winning performance as the Joker in “The Dark Knight,” Nolan went with a lesserknown villain over more familiar Batman baddies such as the Riddler or the Penguin. This time, it’s Bane (Tom Hardy), known to comic-book fans as the brawny brute who breaks Batman’s back and puts him in a wheelchair.

How will Bale’s spine fare?

“ I’m sworn to secrecy, and we’re not allowed to really talk about it much,” said Gary Oldman, who returns as Batman’s police ally Jim Gordon. “I can say this much, that the story’s terrific, that he’s going to really go out with a bang.”

Julia Roberts is the wicked queen to Lily Collins’ Snow White in “Mirror Mirror” (March 16), with the banished heroine raised by dwarfish rogues and leading a battle against the mean old monarch.

“Twilight” star Kristen Stewart is the warrior princess in “Snow White and the Huntsman” (June 1), trained by a rugged hunk (“Thor” star Hemsworth) to wage war against her own wicked queen ( Charlize Theron).

George Lucas begins his sci-fi saga all over, in 3-D, with “Star Wars: Episode I — The Phantom Menace” (Feb. 10), the first of his six space epics converted to three dimensions.

James Cameron gives the same treatment to “Titanic” (April 6), whose 3-D version coincides with the 100th anniversary of the luxury liner’s sinking.

Disney follows the success of “ The Lion King” in 3- D by adding an extra dimension for reissues of “Beauty and the Beast” (which opened Jan. 13) and the Pixar Animation blockbuster “ Finding Nemo” (Sept. 14).

Also in 3-D is the latest from Pixar, “Brave” ( June 15), an action adventure set in mystical Scotland with a voice cast that includes Kelly MacDonald and Emma Thompson.

Among other family flicks: “Madagascar 3: Europe’s Most Wanted” (June 8), reuniting the zoo animals voiced by Ben Stiller, Chris Rock, David Schwimmer and Jada Pinkett Smith; “Ice Age: Continental Drift” (July 13), with Ray Romano, John Leguizamo and Denis Leary back to voice the threesome of prehistoric buddies; “Dr. Seuss’ the Lorax” (March 2), with Danny DeVito as the voice of a grumpy forest creature; “The Pirates! Band of Misfits” ( March 30), with Hugh Grant and Salma Hayek voicing rival buccaneers; Tim Burton’s “Frankenweenie” (Oct. 5), featuring the voices of Winona Ryder and Martin Short in the story of a boy who pulls a Frankenstein to bring back his dead dog; and the summer vacation sequel “Diary of a Wimpy Kid: Dog Days” (Aug. 3).

It’s a new beginning for Middle-earth and twilight time for Bella Swan.

“The Lord of the Rings” director Peter Jackson returns to J. R. R. Tolkien’s fantasy realm with “ The Hobbit: An Unexpected Journey” (Dec. 14) the first in his two-part prequel chronicling how Bilbo Baggins came to possess that pesky evil ring.

“It’s just such a fresh and different story,” Jackson said. “’Lord of the Rings’ had that very serious, grand, epic tone, and ‘The Hobbit’ is much more mischievous and kind of irreverent, which is a breath of fresh air for me.”

“ The Twilight Saga: Breaking Dawn — Part 2” (Nov. 16) picks up where we left off in Stephenie Meyer’s supernatural romance — with Bella (Kristen Stewart) newly changed into a vampire, while her bloodsucking hubby (Robert Pattinson) and his werewolf rival (Taylor Lautner) aim to defend her against a world of evil.

Unlike the romanceheavy “Breaking Dawn — Part 1,” the finale is filled with action and battles.

“It sort of turns into a Kurosawa movie,” said director Bill Condon. “It’s epic. It’s vampires from all across the world meeting in one field.”

Other creature features: “Dark Shadows” (May 11), with Johnny Depp, Michelle Pfeiffer and Helena Bonham Carter in director Burton’s take on the vampire TV soap opera; “Prometheus” (June 8), Ridley Scott’s return to his “Alien” sci-fi world with a space adventure starring Theron, Noomi Rapace and Michael Fassbender; “Wrath of the Titans” (March 30), with “Clash of the Titans” stars Sam Worthington and Liam Neeson in another battle among Greek gods and heroes; “Underworld: Awakening” (Jan. 20), with Kate Beckinsale returning to her vampire-werewolf franchise; “Abraham Lincoln: Vampire Hunter” ( June 22), featuring the president ( Benjamin Walker) emancipating the world from bloodsuckers; “ The Woman in Black” (Feb. 3), with “ Harry Potter” star Daniel Radcliffe as a grieving lawyer who encounters a vengeful ghost; and “World War Z” (Dec. 21), starring Brad Pitt in the story of a worldwide zombie outbreak.

Will Smith’s Agent J travels back in time to save his partner, Agent K (Tommy Lee Jones), in “Men in Black 3” (May 25), which reunites both actors with director Barry Sonnenfeld and nicely casts Josh Brolin as the young Agent K.

Other sequels, updates and spinoffs include: “Total Recall” (Aug. 3), with Colin Farrell as a blue-collar guy who learns he might be a deadly super- agent with falsified memories; Dwayne Johnson and Channing Tatum in “G.I. Joe: Retaliation” (June 29), the commando sequel inspired by the line of toy soldiers; “Journey 2: The Mysterious Island” (Feb. 10), with Johnson and Michael Caine in a modern Jules Verne twist that follows 2008’s “Journey to the Center of the Earth”; “21 Jump Street” (March 16), with Tatum and Jonah Hill in a new take on the TV show about undercover cops at a high school; “The Bourne Legacy” ( Aug. 3), with “Avengers” co-star Renner as a new agent caught up in the fallout from the earlier films; “ Taken 2” (Oct. 5), with Neeson going after more bad guys that threaten his family; “47 Ronin” (Nov. 21), a remake of the Japanese classic, with Keanu Reeves joining a band of samurai avenging the death of their master; and “The Expendables 2” (Aug. 17), reuniting Sylvester Stallone and his all-star action crew on another mission gone wrong.

Not everything on the action front is a sequel or remake. With “Harry Potter” done and “Twilight” nearing its end, a new youthful literary series debuts in “The Hunger Games” ( March 23), with Jennifer Lawrence among teens fighting to the death in a televised bloodbath in post-apocalyptic North America.

Among other new action entries: “John Carter” (March 9), with Taylor Kitsch as Edgar Rice Burroughs’ beefy Mars hero; “Battleship” (May 18), featuring Kitsch, Neeson and pop star Rihanna in a naval adventure based on the Hasbro game; “Haywire” ( Jan. 20), director Steven Soderbergh’s thriller about a betrayed black-ops expert ( mixed martial- arts star Gina Carano); “Safe House” ( Feb. 10), with Denzel Washington as a renegade agent and Ryan Reynolds as a CIA guy on the run from mercenaries; “The Grey” ( Jan. 27), starring Neeson as leader of a team of oil workers stranded in the Alaska wilderness; and “Bullet to the Head” (April 13), with Stallone as a cop chasing his partner’s killer.

The knuckleheads are back. Directors Peter and Bobby Farrelly revive Curly (Will Sasso), Larry (Sean Hayes) and Moe (Chris Diamantopoulos) in “The Three Stooges” (April 13), with the dimwits bumbling to stardom on a TV reality show.

Also among comedy highlights: “American Reunion” (April 6), reteaming the “American Pie” gang for a high school reunion; “ The Dictator” (May 11), with Sacha Baron Cohen oppressing the masses as a Third World tyrant; “Wanderlust” (Feb. 24), starring Jennifer Aniston and Paul Rudd as Manhattanites on hiatus from urban life; “This Is 40” (Dec. 21), Judd Apatow’s “ Knocked Up” offshoot, with Rudd and Leslie Mann reprising their roles as troubled marrieds; “I Hate You Dad” (June 15), starring Adam Sandler as a bad father trying to make amends; “ The Five-Year Engagement” (April 27), featuring Jason Segel and Emily Blunt on a marathon road to marriage; “Jeff Who Lives at Home” (March 16), starring Segel as a manchild helping his married brother (Ed Helms); “This Means War” (Feb. 17), starring Reese Witherspoon, Chris Pine and Tom Hardy in an action comedy about CIA pals who fall for the same woman; “Ted” (July 13), “Family Guy” creator Seth MacFarlane’s story of a grown man (Mark Wahlberg) saddled for life with a talking teddy bear; “Neighborhood Watch” (July 27), with Ben Stiller and Vince Vaughn as suburbanites battling alien invaders; and “Parental Guidance” (Nov. 21), starring Billy Crystal and Bette Midler as a couple enlisted to help their daughter ( Marisa Tomei) with their grandkids.

Spielberg has spent more than a decade preparing for his Abraham Lincoln chronicle and settling on the right actor.

“This was a project I simply had to do,” Spielberg said. “It was a story that needed telling, and I finally have found my Lincoln after many years of searching.”