Dave Smith and me 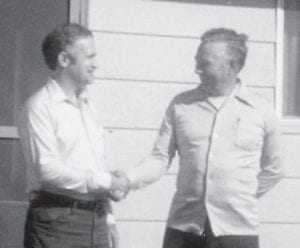 LIFELONG FRIENDS — Jim Cornett is pictured with Dave Smith. The two men have known each other since 1944.

During World War II, we lived the fifth house on the left in Graveyard Hollow. Dave Smith and his family lived in the next house. He and I soon became good friends in 1944, and we’re still good friends to this day.

We kept up with the war news through a radio his mother had sitting in the window of their house. It was turned up loud enough that everyone around could hear it. The war worried us. We were sure in our seven-year-old minds that the Japanese and Germans were soon going to invade the hollow. So, we prepared for them.

With a pick and shovel, we started digging foxholes everywhere. They would be about two feet deep and wide enough that we could both get inside the hole. We camouflaged the holes with cardboard on top, and weeds bent over or piled on top. Then we went into the woods and cut some limbs and made bows, arrows, and spears. We put some fistsized rocks in, just in case we ran out of ammunition.

Most of our foxholes were never discovered by the other kids, because we never old them about them. There was one just above our houses that we covered with a piece of corrugated tin we’d found. That was our largest foxhole, and we would defend that one to the end, because it was so close to our homes.

I don’t remember how many we dug, but there were a lot of them. Then we decided to dig down and make a large room under the ground, where we could store more ammunition. We would dig on afternoons after school and on the weekends.

One was on the hill where the rock-walled graveyard is. It was hard digging through that shale, but we got a good start on it. When it was four feet deep, someone in the hollow dumped their garbage into it. It made us so mad, we stopped digging. It’s probably a good thing we did, because it would have surely caved in on us.

Going up the ridge, we would play in the manmade cave overlooking the Coca-Cola plant. Then up on the next flat place, we started cutting down small trees and made ourselves a log cabin. It was about six feet square. My dad decided he’d better check on our construction methods, and our whole family made a trip one Sunday to inspect it.

On July 3, about 1946, we were playing in our cabin. We could hear firecrackers going off everywhere. A girl at the mouth of the hollow shot a Roman candle across the road and into the dry sage brush. The wind blew the fire up the ridge, right toward us. Instead of running around the ridge, we ran down the hill, right through the fire.

Close to the bottom of the hill, fire was in the tops of some pine trees. I could hear my dad yelling for us, and ran toward the sound. I tripped over him, crawling up the hill under the flames. He grabbed us and ran out of the fire, probably saving our lives.

We caught crawfish in the creeks, and fished at the old Mill Dam. The city dumped its garbage into the river at Caudilltown, just below where the bridge over the river is now. We would go there and shoot rats with my Red Rider BB gun.

Digging through the trash, we would find pieces of metal that we could sell to the scrap metal man who came by once a month. We piled it in the corner of our yards, and guarded it. We once spent most of a day dragging home a metal car top, and we got 50 cents for it.

Both of our fathers worked in the coal mines. Dave’s mother was a very strict woman. When she yelled for him, he dropped what he was doing and ran home as fast as he could. I didn’t know it at the time, but she was a Tyree.

Both of our families moved from Graveyard Hollow about the same time. His family moved to Pert Creek at the foot of Pine Mountain, and mine moved to Blackey. We lost contact for years. Then his family moved to Tiffin, Oh. He spent some time in the Army, and I spent 21 years in the Air Force.

Dave Smith and his family now live in Springfield, Miss. He started a TV repair service there many years ago. My family and I live in Burnside. We see each other from time to time.