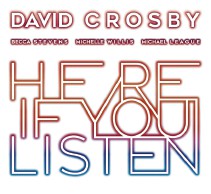 This cover image released by BMG shows “Here If You Listen.”

Crosby, Stevens, Willis & League doesn’t have the ring or reputation of David Crosby’s other multi-named band with Stills, Nash & Young, but “Here If You Listen” makes it wonderfully clear that the 77-year-old’s association with Becca Stevens, Michelle Willis and Snarky Puppy bandleader Michael League is also a rich partnership of harmonies and creativity.

The collaborators also appeared on Crosby’s 2016 album “Lighthouse,” and while Crosby’s name is featured first and most prominently on the album cover, it’s the enhanced teamwork makes the songs work as well as they do.

Built on mostly acoustic frames, the tunes are full of vocal harmonies and exquisite details, as songwriting and instrumental duties are shared in varied combinations.

A pair of Crosby demo fragments from decades ago — “1967” and “1974” — are expanded and completed, with today’s Crosby harmonizing with yesterday’s, while Joni Mitchell’s “Woodstock,” a CSN&Y hit, gets a plush yet controlled reading emphasizing its spirituality.

Other highlights include the haunting doomsday scenarios of “Vagrants of Venice,” ‘’I Am No Artist” — with a Mitchell-like melody by Stevens and lyrics from the late poet and author Jane Tyson Clement — and the soulful “Janet,” written by Willis.

Crosby shows great taste and artistic smarts in giving The Lighthouse Band, as the collective is known, a more prominent presence on “Here If You Listen.” Judging by the outcome, his generosity has been amply rewarded.