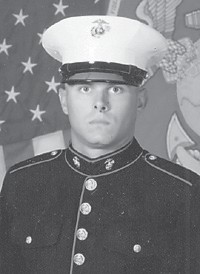 “Lance Corporal Caudill displayed flexibility and willingness to go above and beyond what was required during the exceptionally long hours of arduous preparation and drilling. His vigilance on behalf of the many organizations charged with the safety and security of strategic weapons has been nothing short of exemplary. Lance Corporal Caudill’s initiative and professionalism reflected credit upon himself and were in keeping with the highest traditions of the Marine Corps and the United States Naval Service.”