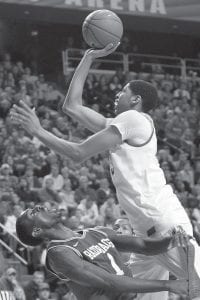 Kentucky freshman Anthony Davis made no secret of his strategy.

“I remember one time he just told his guys, ‘Just bring him in here, I’m going to block everything,’” Arkansas guard Mardracus Wade said.

Davis scored a career-high 27 points and blocked seven shots to set a school season record in the second-ranked Wildcats’ 86- 63 victory over the Razorbacks on Tuesday night.

“ I know they’re definitely thinking about it when they come in the hole and they’ve got to shoot the ball,” said Davis, who had 14 rebounds. “It’s definitely in their mind — where’s Anthony Davis?”

Davis and the Wildcats jumped on the Razorbacks (13-5, 2-2) from the start and led by as many as 20 points in the first half.

Davis blocked his 84th shot with just under 5 minutes left in the first half when he turned away freshman B.J. Young’s layup to set the record previously held by Melvin Turpin and matched by Andre Riddick.

“I didn’t even know how many blocks I had,” Davis said. “I can’t keep up, the game goes so fast. I just want to block every shot.”

Arkansas hasn’t won in four road games this season and struggled against the nation’s second-best defense by field goal percentage despite 12 points from Wade and 10 points apiece from Marvell Waithe, Rashad Madden and Young.

“We came up short, there’s no shame in (that),” Razorbacks coach Mike Anderson said. “I thought they played their hearts out. Kentucky just did so much better tonight. It’s very difficult to win on the road.”

The Razorbacks never got closer than 14 points on the first basket of the second half.

When they cut it to 50- 35 with 14:48 left, Kidd-Gilchrist threw an alley-oop pass to Davis, Jones blocked freshman Devonta Abron’s shot and Teague fed Kidd- Gilchrist in the paint for another slam as part of a 13-2 run that put the game away before the midway point of the second half.

“I just looked at him and said, ‘You played good again, Anthony Davis,’” Calipari said. “He does what he does every game. That’s who he is. I mean, he’s getting points, not being a pig. Getting up there and getting the ball.”

Davis finished 10 of 12 from the field, his best game with at least 10 attempts of his 19-game career and went 7 for 8 from the free throw line. He got a standing ovation with 4:23 left with his seventh and final block, an emphatic swat of Julysses Nobles’ shot into the front row.

“Looking at him on TV, he’s really tall and lanky and you don’t think he’d be that physical,” Wade said. “But actually that guy is pretty physical. He gets in there. He’s relentless. You hit him one time and he’s just going to go back into you again.”

Anderson said his team would try to run against Kentucky, a strategy most teams have tried to stay away from against the athletic Wildcats.

It didn’t work as Davis scored in bunches and the rest of the Wildcats chipped in.

In one sequence, Miller grabbed an offensive rebound and slashed across the paint, flipping a contested reverse layup. Then, Jones started a break by swatting Wade’s attempt that Lamb finished with a floater that made it 19-6.

Davis matched the school record for blocks when he rejected Rickey Scott’s layup off the glass with 8:02 left in the first half, matching the 83 that Turpin set in 1982-83 in 31 games and Riddick tied in 34 games in 1993-94. Davis set the record a little over 3 minutes later when he turned away Young’s layup with Kentucky leading 28-12.

Kentucky took its first 20-point leadwhenLambhita3with3:22 left in the half. Davis blocked another layup by Young with 5 seconds left and swatted Wade’s attempt at the buzzer as the Wildcats took a 37-21 lead.

“I played well. I took advantage of my scoring opportunities. I played good on the defensive end,” Davis said. “It was a great night.”