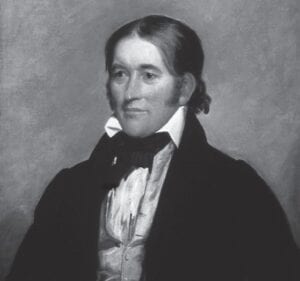 This 1834 portrait of Davy Crockett was painted by Chester Arthur.

We’ve all heard that in the springtime a young man’s fancy turns to thoughts of love. Let’s look at another young man’s trials with the fairer sex.

Davy Crockett is one of America’s most famous folk heroes. From a humble beginning, he went on to become a United States Congressman and received consideration as a presidential candidate before dying at the Alamo in 1836.

His father John Crockett owned a tavern in an area known as Mossy Creek that was located about 10 or 12 miles north of Dandridge on the early road from Knoxville to Washington near present-day Jefferson City, Tennessee.

In the late 1790’s the senior Crockett hired out his 12-year-old son to Jacob Siler, a man he met the preceding day. He assisted Siler in herding cattle to Rockbridge County, Virginia a distance of 300 miles. Siler attempted to keep Davy in his employ by force after their return, but young Davy stole away in the night and hitched a ride to his father’s home with a band of travelers.

Afterward the youthful Davy Crockett bound himself to debtors of his father on several occasions to liquidate his father’s debts. He worked six months to pay a $36 note to Abraham Wilson and another six months for John Kennedy, a Quaker, to erase a $40 debt.

Davy proved to be a good worker and following his period of servitude he presented his father’s promissory notes to him. The elder Crockett cried tears of gratitude.

The youthful Crockett, his garb thoroughly tattered following his year of work, then returned to John Kennedy to work in order to acquire money to buy new clothes.

The Quaker’s niece came for a visit during his employ and Crockett had his first experience with love.

“I reckon no poor devil in the world was ever cursed with a love such as mine,” he wrote years later while serving in the United States Congress. “I found myself head over heels in love with this girl.”

The youthful Crockett was struck to the extent that he couldn’t talk to her.

“I was afraid to begin a discussion,” he said. “My heart would begin to flutter like a duck in a puddle. If I tried to speak it would get right smack up in my throat and choke me like a cold potato.

“I finally concluded that I must die if I didn’t try to speak — that I would speak ‘til my heart would get out of my throat one way or t’other.”

Davy approached her and after several false starts he was able to confide that she was “the darling object of his soul and body.”

When she told the youthful Crockett that she was engaged to another man he experienced an acute case of melancholy.

“This news was worse to me than war, pestilence, or famine; but I knew I couldn’t help myself. I tried to cool off as fast as possible, but I had hardly safety pipes enough as my love was so hot as mighty nigh to burst my boilers.”

Davy surmised that his loss and heartache was due to a lack of schooling. He had attended only four days of school in his entire life and he maintained that he didn’t even know the letters of the alphabet. He immediately began a program of self-improvement and agreed with Kennedy to work two days each week for his board and four days of schooling. The Quaker had a married son who taught school nearby.

Crockett applied himself diligently for several months before deciding that he could not get along any longer without a wife.

“I found a family of very pretty little girls that I had known when very young,” Davy wrote. “I got to loving one of them as bad as I had loved the Quaker’s niece. I would have agreed to fight a whole regiment of wildcats if she would only have said she would marry me.”

When Davy finally asked Margaret Elder for her hand in matrimony she gave him an evasive answer. He kept pressing her until she finally relented and said she would become his wife. He went to the Dandridge courthouse and got the necessary license but when the wedding day arrived he found that his would-be bride had decided to marry the following day. Unfortunately for Davy her plans were to marry someone else.

“This was as sudden to me as a clap of thunder on a bright sunshiny day,” Crockett wrote. “It seemed more to me than I or any human creature could endure. It struck me perfectly speechless for some time and made me feel so weak that I thought I would sink down to the floor.”

After this disappointment, Davy thought there was no mate for him.

A 1960 graduate of Caney Junior College and the University of Kentucky in 1962, Jadon Gibson is a freelance writer from Harrogate, Tennessee. He’s pleased to make his stories available to readers of The Mountain Eagle.