Dawahare’s work was important to Letcher 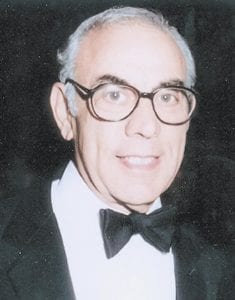 For the first 42 years of his life, Oscar Dee Dawahare was an influential Letcher County resident who worked tirelessly to try to improve the quality of life here.

As one who took seriously his roles as leader of the Neon Lions Club, president of the Whitesburg Chamber of Commerce and member of the Whitesburg Planning and Zoning Commission, Dawahare, who died in Lexington last week at age 90, was among a small group of local business leaders and public offi cials who could always be counted on to do the hard work that was required to secure projects important to the county and region such as the building of the Mountain Parkway and the rebuilding of Kentucky Highway 15.

“He was very civic minded and very easy to talk to,” said Whitesburg Mayor James W. Craft, who remembers the work Dawahare and a few others put into successfully obtaining the funding needed to establish Letcher County’s first public housing development.

Dawahare, a former co-owner of the now-defunct Dawahare’s Department Store chain and manager of its Neon and Pikeville locations, died February 20. He also helped establish the AM radio station WNKY in Neon, where he served as station manager for a period. Funeral services were held Monday at Southland Christian Church in Lexington.

DAWAHARE BROTHERS — Oscar Dee Dawahare is seen standing at far right in this family photo taken in front of the Dawahare’s Department Store building in Hazard. The photograph appeared in The Mountain Eagle in September 2008 with the announcement that members of the family would serve as co-grand marshals of that year’s Mountain Heritage Festival Parade in downtown Whitesburg. Also pictured, from left, are Harding Dawahare, A.F. Dawahare, Woodrow Dawahare, Martin Dawahare, Frank Dawahare, Willie Dawahare and Hoover Dawahare. Dee Dawahare died last week in Lexington at age 90. He was a native of Neon, where he managed the original location in the Dawahare’s Department Store clothing chain.

Dee Dawahare entered the world in Letcher County on March 15, 1923, the sixth child and fourth of eight sons born to Serur Frank and Selma Cury Dawahare. He was born just one year after the family had moved to Neon from East Jenkins to open the first of what would become a chain of 35 Dawahare’s Department Stores. (Serur Dawahare had immigrated to the United States around 1900 to escape religious persecution in his native Damascus, Syria. While living in New York City and working in a sweatshop, he met Selma Cury. At the suggestion of Selma’s brother who was living in Norton, Va., the couple came to the then-booming coalfields and ended up in East Jenkins, where Serur pack peddled merchandise to families living in coal camps.)

Dee Dawahare began leaving his mark on the world at an early age. As a second grader at Neon School, he was honored in November 1930 both for his classroom achievement and for never having been tardy or missing a day of classes.

In 1935, the Dawahare family moved from Neon to Whitesburg, where the second and then-largest Dawahare’s Department Store was opened on Main Street. With the family now living above the Whitesburg store, Dee began attending Whitesburg Grade School. He later attended Whitesburg High School, where he played as left halfback on the Yellowjackets football team and was crowned the school’s Carnival King in 1940.

After graduating from Whitesburg High in 1942, Dawahare volunteered to serve in the Army during World II. He fought against German aggression in Normandy, France in the summer of 1944 and again at the Battle of the Bulge in late 1945.

Upon returning to Letcher County after earning an honorable discharge from the Army, Dawahare began working with his father (his mother passed away in December 1939), three sisters (Nellie, Mary and Sybil) and his eldest brother Willie during a period that saw the Dawahare’s chain expand its operations into Pikeville (1946) and Hazard (1947).

With his father Serur running the Whitesburg store, his brother Willie operating the Hazard store and his brother Harding in charge of the Pikeville store, the reins of the Neon store were handed to Dee.

In 1951, Dee and his 10 siblings were dealt a setback when their father died unexpectedly of a heart attack. The family soldiered on, however, and Dee guided the Neon store through a remodeling project that culminated with more 2,000 customers visiting the store for its grand reopening on December 11, 1952.

Fifty-four years ago this week, on February 26, 1960, Dawahare was married to McRoberts resident Patsy Darnell, who survives him. Two of their four children, Teresa Dawahare Lyon and Kimberly Lynn Dawahare, were born while the couple still made their home in Letcher County.

Dawahare also made a large number of trips to Frankfort to lobby for the construction of what then was called the East Kentucky Turnpike, later named the Mountain Parkway, and the rebuilding of KY 15 from Campton to Whitesburg.

Dawahare “was known as a cheerful giver of his money and time to all who needed his help,” his obituary says. “… If you complimented him on his tie, he was known to take it off and give it to you. That was his way of saying thanks for the compliment.”

When older brother Harding Dawahare died after suffering a heart attack at age 43 in January 1965, Dee, who was one year younger than Harding, became the family’s choice to assume leadership of the Pikeville store that Harding had managed.

Pikeville’s gain was Letcher County’s loss. With Dee no longer living here, the Dawahare children elected to sell their parents’ house to the Whitesburg Methodist Church, which was located directly in front of the house. Brothers Martin and Hoover than moved into the house next door to their parents’ home that had been occupied by Dee and his family.

Meanwhile, the Dawahare’s chain was in the midst of rapid growth outside its mountain home that began in 1961 with the opening of its Gardenside store in Lexington. As new stores continued to spring up at other Lexington locations such as Fayette Mall and Lexington Mall, and in other Kentucky cities such as Winchester, Danville, Somerset, Corbin, Mount Sterling, and even the far western Kentucky town of Franklin, the last members of the Dawahare family to call Letcher County home — Martin and Hoover — joined brothers Willie, Woodrow, Frank, A.F. and Dee in Lexington.

In Lexington, Dee Dawahare was the chain’s vice president and head of operations for the children’s department. He also took with him to Lexington what his obituary calls his “big and generous heart.”

“He was an avid philanthropist and supported numerous charitable organizations in his state and community such as the Lexington Woman’s Club, where he devoted 13 years helping to provide clothing for underprivileged children and the Wounded Warrior Project,” the obituary says. He “was instrumental in the formation of the Dawahare’s Hall of Fame in association with the Kentucky High School Athletic Association.”

“His hobbies were stamp and coin collecting, playing the piano, going to all his grandchildren’s events, and making his wife coffee and oatmeal every morning,” the obituary continues. “Oscar was a true man of God and lived his life accordingly. He attended Immanuel Baptist Church but also enjoyed attending and supporting many different churches in his community. Oscar was known as a cheerful giver of his money and time to all who needed his help. Oscar’s love for Jesus Christ, family, and friends were his greatest passions and possessions. His smile and laughter would light up a room. He knew no strangers and always welcomed people into his home to share a joke and a meal.”

In addition to his wife, Patsy, and four children (Teresa, Kimberly, Michelle Deaton, and Stephen Dawahare), Oscar Dee Dawahare is survived by two brothers, A.F. Dawahare and his wife Jean, and Martin Dawahare and his wife Beverly, and two sisters, Mary Dawhare and Sybil Ajalat and her husband Dick. Also surviving are 10 grandchildren.

Burial was in the Lexington Cemetery. Kerr Brothers Funeral Home of Lexington had charge of arrangements.