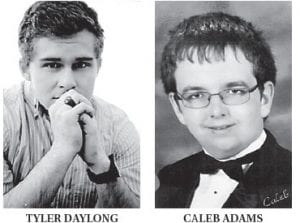 Two Letcher County residents, Tyler Daylong of McRoberts and Caleb Adams of Jeremiah, are participating in the Kentucky Ambassadors of Music tour of Europe.

Daylong and Adams are both members of the Letcher County Central High School music program, which is directed by Jason Griffith and Rob Sheelur. Daylong is also a member of the Eastern Kentucky March Band in Richmond.

Students were nominated to the 200-member Ambassadors tour based on their musicianship, leadership, and character.

Prior to their departure for Europe on June 30, stu- dent participants will gather for a five-day rehearsal and orientation camp at the University of Louisville. On June 29, there will be two pre-tour concerts on the UofL campus.

The Kentucky Ambassadors of Music will perform in seven different countries — England, France, Switzerland, Liechtenstein, Austria, Italy and Germany. The group is directed by Dr. Frederick Speck, Director of Bands at UofL, and Dr. Kent Hatteberg, Director of Choral Activities at UofL.

Daylong is the son of Mona Collier of McRoberts, and Shelby Daylong of Jenkins. Adams is the son of Calvin and Lori Adams of Jeremiah.