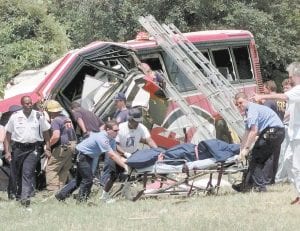 In this May 9, 1999 file photo, emergency workers remove the body of one of the victims of a bus wreck in New Orleans. A chartered bus carrying members of a casino club on a Mother’s Day gambling excursion crashed killing 22 people. The National transportation Safety Board said the bus driver suffered life-threatening kidney and heart conditions but held a valid license and medical certificate. Moments before the crash, a passenger recounted seeing the driver slumped in his seat (AP Photo)

Hundreds of thousands of tractor-trailer and bus drivers in the United States carry commercial driver’s licenses despite also qualifying for full federal disability payments, and some of those drivers have suffered seizures, heart attacks or unconscious spells, according to a new U.S. safety study obtained by The Associated Press.

The problems threatening highway travelers persist despite years of government warnings and hundreds of deaths and injuries blamed on commercial truck and bus drivers who blacked out, collapsed or suffered major health problems behind the wheels of vehicles that can weigh 40 tons or more.

The U.S. agency responsible for cracking down on unfit truckers, the Federal Motor Carrier Safety Administration, acknowledges it hasn’t completed any of eight recommendations that U.S. safety regulators have proposed since 2001. One would set minimum standards for officials who determine whether truckers are medically safe to drive. Another would prevent truckers from “doctor shopping” to find a physician who might overlook a risky health condition. It’s unclear whether any of the eight recommendations will be done before President Bush leaves office.

“We have a major public safety problem, and we haven’t corrected it,” said Gerald Donaldson, senior research director at the Washington-based Advocates for Highway and Auto Safety, whose members include consumer, health and safety groups and insurance companies. “You have an agency that is favorably disposed to maintaining the integrity of the industry’s economic situation.”

Truckers violating federal medical rules have been caught in every state, according to a review by the AP of 7.3 million commercial driver violations compiled by the Transportation Department in 2006, the latest data available. Texas, Maryland, Georgia, Florida, Indiana, Pennsylvania, Illinois, Michigan, Alabama, New Jersey, Minnesota and Ohio were states where drivers were sanctioned most frequently for breaking medical rules, such as failing to carry a valid medical certificate. Those 12 states accounted for half of all such violations in the United States.

– A Florida bus driver who suffers from lung disease and uses three daily inhalers to control breathing told congressional investigators that he “occasionally blacks out and forgets things.” He works as a substitute driver despite not having a medical certificate, and his commercial license expires in 2010. The driver, who was not identified but will figure prominently in a congressional hearing this week, has collected Social Security benefits since 1994. He confided to investigators that he “gets winded” walking to his mailbox but has no problem driving a passenger bus.

– A Virginia trucker with a prosthetic leg from a farm accident more than 10 years ago is permitted to drive tanker trucks until at least 2012, even though he doesn’t have the proper federal paperwork required for amputees. Virginia revoked the medical license for the official who approved him to drive over charges the official was caught illegally distributing controlled substances.

– George Albright Jr., 61, smashed his 70,000-pound tractor trailer into congested traffic on Interstate 70 in June 2006, killing four women in a Ford sedan about 30 miles east of Columbia, Mo. Albright’s employer agreed earlier this year to pay $18 million in a settlement. A Missouri jury acquitted Albright this month on four counts of seconddegree involuntary manslaughter, after his lawyers argued in court that a diabetic episode “put him in an altered state of consciousness.” Albright wasn’t injured.

– A gasoline tanker plunged from an overpass and exploded in flames on Interstate 95 near Baltimore in January 2004, killing four people. Witnesses reported the driver slumped over the wheel. Maryland investigators concluded the driver, Jackie M. Frost, had suffered a heart attack or other medical emergency, but his family disputed that.

– The driver of a 15-passenger “Tippy Toes” day-care bus traveling 63 mph on Interstate 240 in Memphis, Tenn., in April 2002 crashed into a bridge, killing the driver and four of the six children aboard. The National Transportation Safety Board said the driver, Wesley B. Hudson, 27, fell asleep, “quite likely due to an undiagnosed sleep disorder.” Investigators said children sometimes had to wake up Hudson, whom the NTSB described as obese and a marijuana user.

– A 55-passenger bus rolled off Interstate 610 in New Orleans in May 1999, killing 22 passengers. The NTSB said the bus driver, Frank Bedell, 46, suffered life-threatening kidney and heart conditions but held a valid license and medical certificate. Moments before the crash, a passenger recounted seeing the driver slumped in his seat. Bedell died three months later of an apparent heart-related illness. Investigators said he was treated at least 20 times in the 21 months before the accident for various ailments.

Some truckers said the government should enforce existing rules, not make new ones.

“Do you enjoy your clothing and house? Without the truck driver you would have none of it,” said Gary Hull, 52, a trucker for a Louisiana company, as he drove from Edinburg, Texas, to Mansfield, La. “Our economy is based on the truck. People don’t understand the ramifications of making it more restrictive for truck drivers to drive.”

Hull said most drivers are hard workers who earn a modest salary and cope with rising diesel prices. New regulations could add to costs and force truckers to evade the rules, he said.

The Transportation Department said 5,300 people died in crashes involving large commercial trucks or buses in 2006, the latest year for which figures are available, and about 126,000 more were injured. A federal safety study last summer found that cases where drivers fell asleep, suffered heart attacks or seizures or otherwise were physically impaired were a leading cause of serious crashes involving large trucks. But those cases included healthy drivers who fell asleep.

“The problem is major. It’s one of the biggest causes of occupational death in the United States today,” said Dr. Kurt Hegmann, chairman of the FMCSA’s medical oversight board, which is urging more doctor visits in many cases for truckers with serious medical conditions.

While it may be years before any of the board’s proposals take effect, there is nothing preventing doctors from stepping up scrutiny of drivers’ medical conditions right away, Hegmann said.

The 30-page GAO study, obtained by the AP in advance of its release later this week, said 563,000 commercial drivers were determined by the Veterans Affairs Department, Labor Department or Social Security Administration to also be eligible for full disability benefits over health issues. It said disability doesn’t necessarily mean a driver is unfit to operate a commercial vehicle, but its investigators found alarming examples that raised doubts about the safety of the nation’s highways. They identified more than 1,000 drivers with vision, hearing or seizure disorders, which generally would prohibit a trucker from obtaining a valid commercial license.

The chief safety officer for the Federal Motor Carrier Safety Administration, Rose McMurray, acknowledged problems that could lead to unfit truck drivers on the roads. She blamed delays in reforms on a lack of federal money and difficulty coordinating with 50 states. McMurray said changes to strengthen the medical oversight program may not be done for months or even years.

“We have done a lot to recognize the deficiencies in our medical oversight program, and the building blocks we’re establishing are very smart and very strong,” McMurray said.

William Hieronymus II of Salina, Kan., said he remembers eating cereal each morning with his 10-month-old son. His son William and wife, Amanda, died in May 2005 when a truck crossed a median and struck their SUV.

The driver, Scott A. Wegrzyn, pleaded guilty to two counts of vehicular homicide. Prosecutors said Wegrzyn knew he suffered from sleep apnea and went to a second doctor without disclosing the condition to obtain the medical certification he needed to drive.

“I try to go through a day without crying,” Hieronymus said during Wegrzyn’s trial. “I wonder every day what (Will) would have grown up to be, what he would have stood for.”