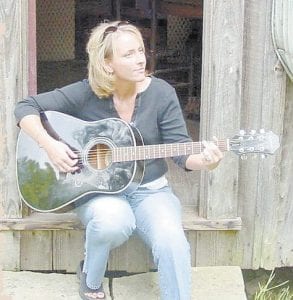 One of the most beautiful voices in the mountains is that of DeAnna Kaye Mullins of Seco. She performed at the annual Jenkins Homecoming Days Festival in August 2007 and made a lasting impression. Soon after the festival, the committee began discussing their favorites and decided that DeAnna Kaye was the freshest new sound of the event. The wonderful mountain ballads she sang touched the hearts of the hundreds of listeners who could easily identify with her songs about the mountains and growing up in the coal camps and shopping at the company store. When she delivers a song you can feel that she is singing about real life experiences.

DeAnna Kaye was born and raised in the coal camp built by South East Coal Company. Her parents are John and Vernita Adams. When the coal company sold its holdings, John’s parents bought the old commissary building and operated it as a general store for many years. As a youth DeAnna loved being in the store with her grandparents, running through the many passages of the store and hanging out with the locals.

While she was in school she had a quiet disposition until she opened her mouth to sing. Then everyone took notice of the beautiful little girl with vocals bigger than her body. She sang every time the opportunity arose all through school. After high school she continued singing at local festivals and entered many talent contests. When she won first place in a contest sponsored by WXKQ radio, she made a big impression on station manager Greg Yaden. This led to a job as an announcer at the station for about a year.

Meanwhile, the old company store was purchased by Jack and Saundra Looney and turned into a bed and breakfast facility. DeAnna was glad to get a job working there in the old building she loved so much when she played there as a child. It was different now that she was married and had a family and needed employment. She loved the work where she did everything from painting artworks to serving meals to entertaining on their stage on weekends.

There she met Stan Dixon, a true music writing talent who asked her to perform many of his original songs on the stage and in the studio. This led to a huge win during regional competition of the nationally known Colgate Country Showdown. They started traveling and performing in shows from North Carolina to the stages of Nashville. Performing at The Bluebird Café was definitely a highlight for both of them.

Traveling was taking its toll on her marriage and family so she decided to put the musical career on the back burner. She became an instructional assistant for the Letcher County School System. Now she and her children are together at the same grade school she attended as a child, Martha Jane Potter Elementary School at Kona.

After 14 years of married life, after too many trials and errors, it was clear it was over. In the fall of 2004 a local musician, Jesse Mullins, called her at work and asked her if she would be interested in doing some vocals for a band he was playing with at the time. Oddly enough they had met, hung out and jammed a couple years earlier with another local band. They had no clue that their paths would cross again leading them in a much different direction. She had stayed out of music for a few years while she concentrated on being a mother and breadwinner. She almost declined the invitation but then she thought, why not? She began practicing with the band and hit it off with Jesse. Their relationship was a whirlwind. They had much in common from their past to what they wanted for the future. Although they had many obstacles they were determined to be together.

They married in August 2005 and have four great children between them. They remain very busy and devoted to their new family and still find time to write music and perform together. Her newly release CD is a reflection of the artist’s own life trials and triumphs.

DeAnna Kaye and Jesse will perform at the Jenkins Homecoming Days Festival Saturday night, August 23, beginning at 8 p.m. They will be opening for well known pop music artist John Berry.