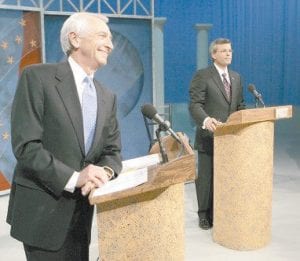 Republican Gov. Ernie Fletcher, behind in the polls and seeking a last-minute surge before next week’s election, had to defend his administration’s work in monitoring nursing homes during a televised debate Monday night.

“People in nursing homes … are not a priority for this administration, and it’s very clear that they’re not,” Democratic challenger Steve Beshear charged during their final face-off before next Tuesday’s general election.

A recent Lexington Herald- Leader report found that the number of nursing homes cited for serious deficiencies dropped from about one in four under former Gov. Paul Patton to about one in 10 under Fletcher. Some patient advocates worried that the drop in citations did not correspond to an increase in care.

“What we did is we got better care,” Fletcher said of his administration’s performance. “And then we targeted the nursing homes and we closed, I believe, three nursing homes recently.”

Beshear countered that a drop in the number of nursing home citations since Fletcher took office in 2003 was a matter of prioritization.

The debate, aired live from the Kentucky Educational Television headquarters in Lexington, was the last of a grueling series of faceoffs that have featured increasingly repetitive rhetoric. The candidates offered their standard spiels on education, economic development and health care issues.

New to the discussion on Monday was the issue of mountaintop removal coal mining, which, as the name suggests, involves moving mountaintops to get coal out of the ground.

Fletcher and Beshear agreed that the mining process can create an ugly aftermath but that it is sometimes necessary to create flat land that can be used to build factories, hospitals and airports in the mountains of eastern Kentucky.

Fletcher acknowledged the process did have “some impact” on the environment but said his administration had worked to clean up streams and reforest some areas that had been mined. He also noted that Kentucky has grown a large elk herd on former mine sites.

“It obviously needs a balance, and I think we need to continue the balance,” Fletcher said. “I agree with Steve, it’s provided some land for development.”

Beshear said the amount of mountaintop removal that occurs in Kentucky could be limited by enforcing existing rules.

“The fact is that we will continue to mine coal into the indefinite future,” Beshear said.

Monday night’s face-off could be the most critical of the campaign, Northern Kentucky University political scientist Michael Baranowski said.

“Fletcher is in a swing-forthe fences situation,” Baranowski said. “It seems to me at this point, he may as well go all out, because he has absolutely nothing to lose. It’s ‘Hail Mary’ time. This is his last chance.”

Baranowski said Beshear needed to take an opposite tact, saying as little as possible in the hour-long debate.

“He’s protecting a big lead,” Baranowski said of Beshear. “The only thing that could cut into that would be for him to do something colossally stupid.”

The candidates differed on whether nursing homes should be required to maintain a certain nurse-to-patient ratio.

Fletcher said he did not think a requirement like that was appropriate, while Beshear said that’s something he would consider if elected governor.

Fletcher also raised his standard objection to a proposal that could legalize casinos in Kentucky.

Beshear favors a ballot referendum that would allow voters to decide whether to change the constitution to allow casinos.

Expanding gambling at race tracks and in a handful of communities along the state’s borders, Beshear contends, would generate $500 million in additional tax revenues that could be used to improve the lives of Kentuckians.

Before casinos could open, voters would have to give their approval through a ballot referendum.