Debate over top pick for Oscar not slowing 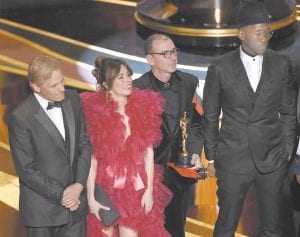 Viggo Mortensen, from left, Linda Cardellini, Dimiter Marinov and Mahershala Ali accepted the award for best picture for “Green Book” at the Oscars on Sunday at the Dolby Theatre in Los Angeles. (AP Photo)

The decision to hand the best film Oscar to “Green Book” continued to be debated this week, long after the last Champagne glass had finally been emptied. Rarely in Oscar history, after all, has a winning movie prompted a noted guest in the audience, who had just won his first competitive Oscar, to try to storm out of the night’s big coronation.

Spike Lee’s vocal disapproval of the segregation-era road-trip drama was but an early indication that “Green Book” will remain a polarizing choice, especially for its depiction of race relations and its sentimentalized approach. It emerged victorious on the night against Lee’s own confrontational “BlacKkKlansman” and the Afro-futuristic blockbuster “Black Panther.”

Meanwhile, Justin Chang a critic at the Los Angeles Times laced into “Green Book,” calling the film “an embarrassment” and “the film industry’s unquestioning embrace of it is another.” He declared it “insultingly glib and hucksterish, a self-satisfied crock masquerading as an olive branch.”

“Green Book” tells the story of a white man who becomes friends with the black musician he drives through the 1960s South for a concert tour. The name is derived from a publication that helped African-Americans find establishments that would serve them in the segregated South.

Seated in the audience on Oscar night, Lee waved his hands in disgust and appeared to try to walk out of the Dolby Theatre when “Green Book” was announced as the winner of the top trophy Sunday. He made his way back to his seat and later backstage compared the best film selection to a loss by his beloved New York Knicks basketball team. He later joked, “The ref made the wrong call.”

Members of the team behind “Green Book” sought to dampen any lingering tensions. Of Lee’s criticism, co-writer and co-producer Brian Currie told The Associated Press, “We have all the respect in the world for the guy.”

Mahershala Ali, who won a best supporting actor trophy on Sunday for his role in “Green Book,” told The Associated Press in November that the film is a portrait of race in America unlike one by Jenkins or Amma Asante or Ava DuVernay. But he believed the film’s uplifting approach has value.

But even relatives of concert pianist Don Shirley — depicted in the film by Ali — took issue with the story’s accuracy.

“We know what the truth is,” said co-writer and producer Nick Vallelonga. “We know how hard we tried to respect everyone involved and just tell the best story we could.”