Decoration Day celebrated with their friends and family 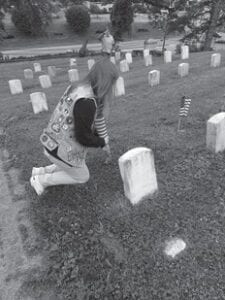 Flag placement for Memorial Day. A special thanks to Boy Scout Unit 751, Chris Sapp, and Southgate Veterans of Foreign Wars for organizing and providing more than 2,000 flags. Katelyn Nottingham, daughter of Scott and Anna Nottingham, helps to place flags on the graves.

Hello everyone! Is it summer or winter in your area? As written before, you better still have the long johns handy as you still need a winter coat in this part of the Ohio Valley area.

While I was in the mountains a couple of weeks ago, son Keith Ballard installed the window air conditioner. What he didn’t know was we would still be needing the furnace.

I think my beautiful petunias have gotten frostbitten as the temperatures dropped to 40 degrees, which means it is always colder this side of the river.

Yesterday I walked out in the front yard for a few minutes, discovered Keith has made another circle in the yard. He planted what he thought was tree smack dabbed in the center in the side yard, except it is a forsythia bush. Anna had given it to me. Of course I made the mistake of setting it down out back, as I didn’t know exactly where to plant it.

Keith has moved my irises so many times that lots of colors didn’t bloom this year.

I hope everyone had a safe Decoration Day remembering those who gave their all, along with the celebrating of cookouts and enjoying time with family and friends. 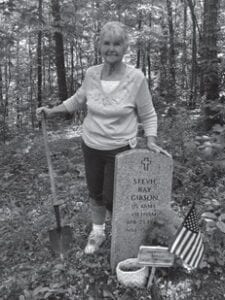 Thanks to my niece Sue Hall and Billy Collier for taking me to Coots on the top of Big Branch Mountain. I stopped for a few minutes to thank Stevie Ray Gibson, an unknown young boy from Roxana who gave his life for our country

I am very grateful that I was able to get to the cemetery on top of Big Branch Mountain to put a few flowers on my families’ graves without worrying about tearing up someone’s vehicles, or getting partway up the mountain and having to back down a mile before you can turn a spot wide enough to turn around.

Thanks to Cheddy Smith for getting the ball rolling to make this possible, and thanks to Judge/Executive Terry Adams. This road should have never been let go as long as it was, among other roads to cemeteries.

It may not matter to elected officials who don’t have relatives buried in some godforsaken places such as Big Branch Cemetery, Coots, or whatever it goes by. I will stick by my opinion; it matters to me.

At one time I wanted to be laid close to Mom and Dad when I reach the end of this journey called life. I changed my way of thinking, and I will be put here locally someplace.

If I believed in cremation, I would have my ashes thrown in the wind so they could float in the mountains free.

While I was at the cemetery my heart broke without shedding a tear as I observed the Gibson and Hollins graves.

On one side is my grandma Rosa Hollins Hall’s brother Harlan Hollins and his wife Sara Adams Hollins. A couple of feet away are Stevie Ray Gibson, Martha, Bessie Jane, and Mother Leona Hollins Gibson. I might be leaving someone out.

Sara Adams Hollins is the mother of my Grandpa Ben Adams, on Mother’s side.

Then down the hill is where my family is buried together except my brother Jerry Allen Hall who is buried in Green Acres, where no one cares enough to lay a dollar bunch of flowers. I intend to try to get there when I go back again to the mountains.

From what I understand there’s a cemetery at Blackey where my grandmother Betty Barton is buried along with several of her family that you can’t get to in a vehicle. I am going to try to get there with lots of assistance. Maybe Jack Adams will take me on his four-wheeler.

I’m sorry for starting my column of on such a morbid tone.

Sometimes things need mentioned and through my column is about the only way I know of doing it.

Once again I can feel the tug on my heartstrings to want to head back to the mountains, this time for no particular reason. Wait a minute, when did I have to really have a reason for my heart and feet to overtake my brain in thinking when it comes to heading to the mountains I call home in my heart?

I keep thinking of Russ and Annette Akers and the possibility of having lettuce and onions, and peas should be coming on before long.

When Daphne and I were down home a couple of weeks ago, Annette invited me to stop by for a mess of lettuce and onions, but trying to get to the graves it seemed time passed so swiftly. It is always such a nice time visiting with Annette and Russ.

At least we spent a little while with my niece Sue Hall, and about half an hour with Mike and Marcia Caudill, who will get tired of me, as the firepit and marshmallows are habit forming.

I haven’t been able to use my firepit that Mike and Marcia gave me for my birthday. Keith put it together for me, but since I returned back home I have been too sick to do very much of anything.

I knew I was becoming dehydrated while I was at the campus. I had taken water with me but forgot to put it in my room. There’s no way I was going outside at night, and I sure wasn’t going to disturb Daphne. Then of all things I slept with the overhead fan on, knowing what it would do to me. Of course I got an upper respiratory infection, which I’m not completely over.

There was a wonderful tribute for my cousin Gracie and George Widner’s son, Kenneth Widner, given by the City of Cumberland. Plaques were given by the mayor and several comments on what a wonderful person Kenny was and such a great employee, along with enough food to feed an army.

Kenny lived in Tennessee, which meant he drove two hours each way to work and back. Kenny fell asleep and was killed instantly in an accident on his way home from work

George and Gracie live in New Tazewell, Tenn. Gracie has been in stage four of liver cancer for some time, yet she keeps hanging on like a trooper.

Their daughter-in-law Geneva Widner knew Gracie wasn’t able to make the trip in one day, so she rented a cabin on a lake in Partridge for the family.

Johnny and Ann Calihan are holding their own. Johnny has been enjoying sitting on the porch when we had a few warm days. Ann has a foot that is swelling very badly.

Please keep their daughter Carol Dieckman in your prayers.

Hello to Buddy and Bernice Grubb and to their grandson Mike, who is a faithful reader of my column. Buddy, I hope you are doing a little better.

Mike and Marcia Caudill, just remember you never know who will show up. Just joking, you know I always call.

Les and Pat Wagner, I haven’t forgotten about you. I hope you are doing alright.

For those of you who live in the area who need landscaping of any kind please contact, Jack Adams 606-335-7179.

Time has caught up with me. I promise next time the column won’t be as bad as this one. Until next time.