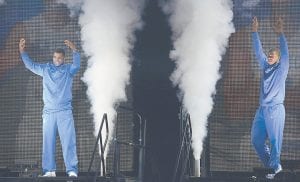 Just as Drake appeared to draw the biggest cheers at Big Blue Madness, the rapper introduced Kentucky coach John Calipari and the noise then became a roar.

Kentucky returns six regulars from last year’s NCAA tournament runner- up squad and has added four high school All-Americans, giving Calipari a 12-deep roster he plans to use with a two-platoon system. The Wildcats went 5-1 using the strategy during a summer tour of the Bahamas.

Perhaps mindful of last year’s struggles with a freshman-laden squad, the coach cautioned, “this is going to be a process. We’re trying something that’s never been done before.”

Kentucky’s women had their moment onstage and on the court as well. The Madness began with coach Matthew Mitchell channeling singer Bruno Mars in dress and song as he actually belted out a couple of his numbers.

However, the night belonged to Calipari’s group and the Wildcats offered glimpses of what life could be like with two full rotations.

The White squad featuring a frontcourt duo of 7- footers Willie Cauley- Stein and Dakari Johnson topped the Blue team featuring freshmen Karl-Anthony Towns ( 6- 11) and Trey Lyles (6-10), 42-36. Calipari is far from determining lineups, but each had their moments with nothing held back.

Guard Aaron Harrison, who returned with twin brother Andrew for their sophomore seasons, needed time to collect himself after being knocked to the floor during a 3-on-3 drill. Cauley-Stein blocked two shots seconds apart during the 5-on-5 portion and ran the floor fluidly after missing the title game and the summer with an ankle injury.

Though this year’s team isn’t facing projections of going unbeaten like last season, expectations of a championship remain. Kentucky earned the No. 1 ranking in the USA Today coaches poll last week.

All of which spiked interest in Madness, an electric night that’s about more than basketball. Kentucky’s storied history was emphasized with each championship banner displayed on separate video screens.

But the evening had more of a rock-concert feel with a multi- level stage featuring two giant screens erected on one end. Players were sometimes obscured by plumes from smoke machines during their intros.

The scene was perfect for Mitchell, who once again delighted the crowd with a clever impression of Mars, complete with a blue sequined jacket, white shirt, pompadour wig and sunglasses.

Hoarse and slightly off key, Mitchell gave it a good shot and was well received.

The women’s team conducted a brief scrimmage before giving way to Drake, who seems to show up everywhere these days — especially when the Wildcats are involved. Having been with them at the Final Four this spring, it wasn’t shocking to find him in Rupp.

Drake laid out numerous superlatives while introducing the coach, calling him one of the most important people in his life.

“He’s the Godfather of those that bleed blue,” said Drake, adding, “he’s probably got some of the best hair I’ve ever seen in my life. He’s like the George Clooney of the hardwood.”