Deer population may be increasing 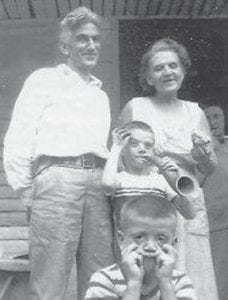 Mom and I sure are liking the warmer days we have had. I even had her out walking around in the yard a little bit one day last week.

We were sitting out on the patio and I looked up in the woods and asked her, “Mom, where do you reckon all the deer are on this beautiful warm day?” She said, “Honey, I reckon they all just about got killed out by the pink eye.”

I told her she was really close, she had a body part and a color and that was close enough. We have been seeing quite a few deer this spring, though. So, hopefully their population will still be enough to have hunting season.

We really enjoy eating venison in our family. We even have backstrap at Thanksgiving and Christmas. I have even been hunting a few times myself. Wasn’t able to actually kill one though, because I only had about five seconds to find the deer in my scope, and then find the kill zone and pull the trigger. Didn’t happen. But, we have a nephew that usually kills one or two and he can’t eat the meat because of gout so we wind up with his along with the ones my husband gets. Needless to say we don’t have to buy much beef either. 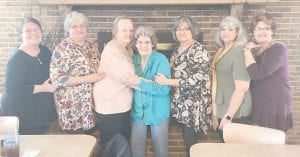 Speaking of food, we haven’t been able to eat with the Letcher County Senior Citizens much this month. Mom hasn’t been out much since she fell and hurt her rib and I have had so much to do that I usually leave the rec center before 11 a.m. Mom is getting better though and before long she and Lizzie Mae Wright will be reminiscing once again.

Today before I left there I got to see Rhuford and Colleen Hart. They both look so good. He had on a very fashionable hat because of his chemo treatments. He said he was still able to preach. I think that’s amazing.

I don’t think I mentioned last week that Matilda Parks had been back to the rec center, also. She is an amazing survivor of breast cancer. There used to be a good-sized group that met upstairs at the center every morning and now there are only Mom, Charles Noble, Bennett Combs, Jack Burkich, Billy Hatton, and Earle Bone left.

Judith Vermillion and Pearl Noble both passed away. Rhuford and Colleen Hart aren’t able to work out yet. Matilda is just now getting able to come back. Lorraine Kuracka and Junior have been away since he was admitted to the hospital. However, I did hear today that he is finally starting to improve.

Juanita Banks is having lots of knee problems and so she doesn’t get to join the exercising group upstairs anymore. This little group has been there since the Wellness Center was closed and they have made a big impression on the others that are there every morning.

This morning Doreen McCray brought them in a homemade coconut cream pie. She said she thinks the world of that little group. She told me this morning that when she was working at Wal-Mart Charles and Auntie Pearl would hunt her down and get her to help them find the things they couldn’t find. Oh, how we miss my Auntie Pearl!

I saw one of the Howard brothers with his wife at Wal-Mart the other day. It was either John or Hillard. When I saw him and he saw me I said, “Hello Howard!” and he replied back to me, “Hello Tacket!”

Then we started talking and left each other without even mentioning which one we were. As we were ended our conversation, we of course had to talk about Oma. I told him just last week Mom and I were looking at a picture and thought to ask Oma about someone in it because we weren’t sure.

Pictures are amazing things. Without them so many people and memories would just be lost. Monday, we met one of Mom’s longtime friends, Gertrude Gilbert, and her daughter Belinda Clayton at Prime Sirloin in Norton, Va. to share some old pictures.

Gertrude’s sister Lelah later married Mom’s brother Merill Pennington. All four of us sisters, (Charlene, me, Lucille and Delores) were able to be there.

We had such a good time just catching up on all kinds of things. Most of what we talked about had to do with children and grandchildren. Most of the time people don’t get to do this unless it’s at a funeral and that’s so sad. I think we need to make time for our family more often.

I found this entry on the Growing Up in Marlowe Facebook page and it fit our conversation today so well that I wanted to post it. We were talking about how we would love to have a video of the life our moms had to live back in the 50’s at Marlowe and how hard their lives were compared to ours, and the work they had to do compared to what we do as wives.

This entry was written by Jim Cornett and is actually taken from a book he has written about growing up in Marlowe.

“It’s so hard to believe World War II started, and many people at Marlowe were drafted. Ms. Rose went to the draft board and looked at the names on the draft list. She got many men taken off the list, and probably saved a lot of their lives.

“She said the nation needed the coal for the defense plants, and she couldn’t do without these experienced miners. And, she was probably right.

“My dad was drafted at age 33. When he got to Winchester and passed the physical, they announced that any man with more than three kids could go home. He and another man from Marlowe hitchhiked home.

“Very few people had a radio back then. My grandpa had a big Philco radio with an antenna — a copper wire — strung along the top of the house. He only played it to hear the news at 6 p.m.

“Our house was crowded when the news came on. The women brought cakes and cookies, and some brought coffee. They caught up on all the gossip.

“We were glad to see them come, because we could play with our friends in the yard, away from the house, so the grownups could hear the news. My dad had a map of Europe, and they would follow the troops wherever they went. When the news went off, they would sit around and discuss what they had just heard about the war, then all would drift home.”

Astor Hatton: My dad, Clyde Hatton, went in the Navy as well as his brothers, Tommy and Maney!

Shelsie Page: Did you ever know my dad, Wid Page? He grew up in Marlowe and wrote a book about Marlowe.

John Miller: Your mom and I grew up together. She and my sister went to school together.

Jim Cornett: I knew him vaguely. I was set up beside him at Whitesburg Day in front of the library where we were selling our books. I traded him one of my books for one of his.

John Miller: Wid Page lived next door to me when we first moved to Marlowe.

Jim Cornett: Sherman Ison and Eli Lucas from Marlowe died in the war.

I love reading these entries on the Growing Up in Marlowe Camp. If you all need any information on how to join it just let me know.

Please don’t forget my uncle, Robert Wagner is still in need of prayer and so is my aunt, Linda Hall. Both are in the nursing home at Letcher Manor.

My dad’s sister, Yvonne Tacket Hall, is also in need of prayer. She has colon cancer but also has Alzheimer’s. They have now called Hospice in to help them take care of her. She and her husband Ray live in Tiffin, Oh.

We heard at church last night that Shirley Breeding had passed away. She was a teacher at Colson Elementary School many years ago.

So I’m sure their family could use our prayers too, along with all the others that have lost loved ones especially our pastor, Bill Jones and his wife Sandy. As hard as the death of their son and his girlfriend has been on them they continue to stay strong in their faith that God has a reason and a plan for what has happened.

His message Sunday was taken from Romans 8:28 which says, “And we know that all things work together for good to them that love God, to them who are the called according to His purpose.”

All things means just that, all things, not just the good but also the bad and the heartbreaking things we go through.

On that note, I will end here with begging you as Oma did, to attend church Sunday and also if your church has services Sunday night or throughout the week God would expect you to be there then, too.