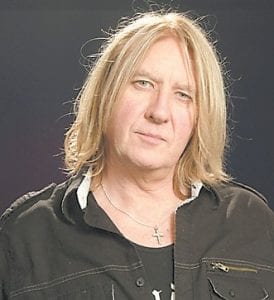 Def Leppard frontman Joe Elliott understands that the working life of a rock band no longer comes with an expiration date. All that’s required is to make great music and stay healthy to endure the rigors of the road.

Elliott said it was important to tweak the mantra of sex, drugs and roll ‘n’ roll in order to sustain the band’s longevity, which has covered four decades.

“At the end of the day, the first thing that needs to go out of that phrase is the drugs. The rest can stay, but let’s make rock and roll the important thing,” said Elliot, who will go on a tour of North America with Styx and Tesla this year. The U.S. leg of the tour will kick off June 23 in Tampa, Florida.

Def Leppard was formed in 1977. The English rock band achieved superstardom in 1983 with “Pyromania,” followed by “Hysteria” a few years later. These albums generated numerous rock anthems including “Pour Some Sugar on Me” and “Foolin.’”

In a recent interview with The Associated Press, Elliott talked about the band’s continued drive.

AP: Is Jethro Tull’s song “Too Old to Rock and Roll: Too Young to Die!” still relevant?

Elliott: He was probably just in his late 20s when he wrote it. Now (Jethro Tull frontman) Ian Anderson is in his 60s and still making great music. … Age doesn’t matter anymore. That’s the one thing that’s become a pattern over the last seven or eight years, with (Paul) McCartney still out there and the (Rolling) Stones still out there, and even Aerosmith and AC/DC getting up there. Billy Joel, Elton John. These are people that have been around since the ‘60s and they’re still selling stadiums out. There’s nobody else that seems to be coming through to take over. They’re not stepping aside, they’re fighting. They’re fighting us, and we’re fighting the generation below us.

AP: Why do you keep going back out on the road?

Elliott: My generation grew up watching bands live. Yeah, we loved albums, but we never thought about how they were made. They just appeared. And you’d see the tours being announced. … I think that’s what attracted me to it. Seeing those people onstage and how us down on the floor were looking and cheering and going crazy, thinking this is pretty cool. I’d like some of that. I think that it’s the attraction of playing in front of people and creating music so you can go out and do that is what keeps us going.

AP: Did you have any idea that you would remain relevant for so long?

AP: Has there been a shift in the so-called “rock star” lifestyle?

Elliott : We weren’t monks in the 1980s, but we weren’t as bad as everybody made out. We aren’t as boring as people might think, but we’re not exactly Motley Crue. … When we were doing ‘Pyromania’ and ‘Hysteria,’ we were all single and we didn’t have kids. Now we’re all married with children, so life has changed. Music is very important, but family is more important. Let’s be honest, we have to juggle both. It’s a case of getting everybody onboard.