Defeat of health care bill has some worried about ’18 races

By ALAN FRAM The Associated Press 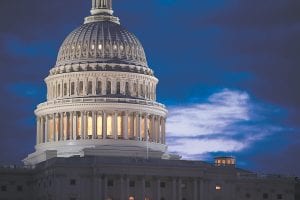 The U.S. Capitol dome is seen at dawn in Washington. The crash of the House Republican health care bill may well have transformed an issue the party has long used to bash Democrats into the GOP’s very own political nightmare. (AP Photo)

The crash of the House Republican health care bill may well have transformed an issue the party has long used to bash Democrats into the GOP’s own political nightmare.

Since former President Barack Obama’s health care overhaul was enacted in 2010, Republicans have blamed Democrats for rising premiums and diminished choices of insurers and doctors in many markets. Repealing Obama’s law has been a paramount GOP campaign promise that helped them grab control of the House that year, the Senate in 2014 and elected Donald Trump to the White House last November.

Yet here they are, in full control of government but unable to deliver their pledge. Instead, they’re sweeping up debris from a failed bill that party moderates and conservatives hated, sparked a civil war between Trump and the hard line House Freedom Caucus and threatens to alienate GOP base voters.

Many Republicans say they now own the health care issue.

“ If you say, ‘ This is Obamacare, it’s failing,’ people can say, ‘Well, we elected you to fix it,’” said Tom Davis, a former Republican congressman from Virginia who headed the House GOP’s campaign committee.

“We have the House, the Senate, the White House,” said David Winston, a GOP strategist who advises congressional leaders. “People are going to expect points on the board.”

Davis, Winston and others note that it’s a long way to the November 2018 elections. That’s when Republicans will defend their congressional majorities, so GOP successes on issues like tax cuts and infrastructure that affect the economy and jobs could overshadow their health care dud.

In addition, party leaders hope to produce new health care legislation. It’s unclear how they’d do that without compromising with Democrats, who currently have little motivation to pull Republicans out of the quicksand. That could change if Democrats decide a deal is better than gambling on whether voters blame them and Obama’s law should premiums rise and the number of insurers decline significantly.

“They both have risk, and that’s a recipe for ultimately some action to be taken,” said Mike Leavitt, health secretary under President George W. Bush.

For now, there are ominous signs for Republicans.

The Associated Press- NORC Center for Public Affairs Research poll last week found strong voter antipathy for how Trump is handling health care and for the sunken House GOP bill. That included widespread worry that people would lose coverage and opposition to its higher premiums for older people, smaller subsidies for lower earners and cuts in Medicaid aid for the poor.

Dangerously for Republicans, threatening to reduce federal health care aid speaks directly to voters in states that backed Trump. All 13 states with the highest proportion of people getting federal subsidies for their insurance premiums voted for him last November, according to federal data.

Democrats view all that as campaign ad fodder. Speaker Paul Ryan, R-Wis., protected many Republicans by averting a House vote on the doomed bill, but several dozen supported it in committees.

“Clearly the Republicans own this,” said Rep. Ben Ray Lujan, D-N.M., who heads House Democrats’ campaign organization. “We will continue to make sure that the American people know about their votes.”

GOP damage could come from another direction, too.

Failure to dismantle Obama’s law could dampen turnout in next year’s congressional elections by voters demoralized when Republicans fumbled their promised repeal. Brent Bozell, chairman of the conservative For America, said it would be “absolute suicide” for the GOP to stay on its current, unsuccessful course.

“Just saying, ‘Give us four more years and we’ll repeal it’ is going to be very hard” to sell to voters, said Robert Blendon, professor at the Harvard School of Public Health.

Aware their fates might rest on how insurance markets fare, both parties will closely watch insurers’ filings due in June. Those will indicate what markets they intend to serve in 2018 and what premiums they’d like to charge.

Also scrutinized will be whether regulatory actions by Trump and health secretary Tom Price buttress or undermine insurance markets.

Trump issued an early executive order that agencies curb implementation of Obamacare, and he’s repeatedly predicted the statute will explode. Price has noted that the law has 1,442 provisions that leave decisions to the health secretary and said he would study “every single one.”

In early evidence Trump is uninterested in severe disruptions, Ryan said last week that the administration will for now continue financing $7 billion-a-year in subsidies for deductibles and co-payments for over 6 million low-income people.

A federal court ruled the Obama administration had no authorization to fund that program. The Trump White House could accept that ruling and halt the payments, which go to insurance companies who’ve said the money is crucial for them to continue providing policies.

All this pressures GOP lawmakers to get it right if and when they produce new legislation.

“Next time around, it’s you-know-what or get off the pot,” said Rep. Steve Womack, R-Ark.