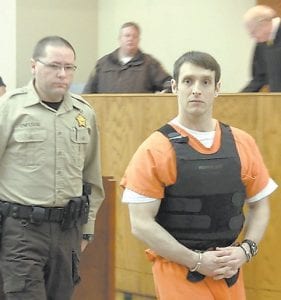 James R. Huffman IV, convicted in the 2014 murder of Michael Hogg, was led from the Letcher Circuit Courtroom after he was sentenced. (Photos by Chris Anderson)

Letcher Commonwealth’s Attorney Edison Banks is demanding an apology from defense attorney Robert Wright, after Wright blamed the victims of a knife attack for their own murder and attempted murders at the hands of Wright’s client, James R. Huffman IV.

Huffman was convicted last month of complicity to murder, three counts of complicity to attempted murder, and one count of criminal mischief in the New Year, 2014, stabbing death of Michael Hogg and the attempted murders of three of Hogg’s friends. Special Letcher Circuit Judge Kent Hendrickson formally sentenced Huffman on Friday to life without possibility of parole for 20 years and without the possibility of probation.

Wright made the remarks during Huffman’s formal sentencing in Letcher Circuit Court last week, saying there was “enough blame to go around,” and said the victims could have done things differently to prevent the “tragic events” of that night. 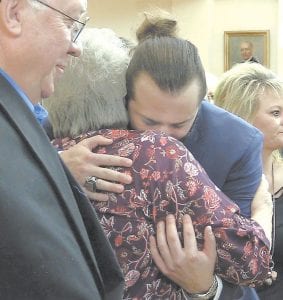 Wright, who is running for district judge in Pike County and two weeks ago harshly criticized the court here, the jurors and the media in an interview with his hometown newspaper, the Appalachian News-Express, said during sentencing that everyone involved in the case will be affected for the rest of their lives, including him, and including Huffman.

“Our job as members of the bar and members of the bench is to seek justice and to find that where we can and to follow the facts, follow the law and to look for it. We took an oath to do that, and that’s what we’re asking for,” Wright said.

“To lay that all the blame for the events that night squarely on Mr. Huffman is somewhat disingenuous,” Wright said.

“Be that as it may, we believe that theory was completely and soundly rejected by the jury based entirely on the evidence,” Banks said.

Banks said what happened was “overwhelmingly” proved, including by Huffman’s own testimony at trial.

Banks asked that judge hand down the sentence recommended by the jury – life plus 45 years – objecting to court decisions that say the lesser sentences must run at the same time as the life sentence. Banks said the Supreme Court “failed to look at the rights of the victims in these cases.” Banks went further in an open letter to Wright published in this week’s Mountain Eagle (see Page 4), writing, “While no attorney likes to lose a jury trial, in my many years as a prosecutor, I have never heard of a losing attorney blaming his or her loss of the trial upon the legal system, the jurors and court as was done here by Hon. Robert Wright.

“Likewise, I have never heard of a losing attorney in a criminal case blaming the victims for their own murder and attempted murders as was done by Mr. Wright at the sentencing of his client by the court this past 19 January 2018,” Banks wrote.

Banks said he didn’t know whether Wright’s remarks were made “in a moment of frustration or anger over … his loss of the case,” or if it was due to Wright being “an active candidate for the high office of Pike County District Judge, and now fears that the life sentence without the possibility of probation recommended by the jury and imposed by the court upon his client in this matter will be detrimental to such candidacy.”

Banks called on Wright to apologize for the “unwarranted and inappropriate attacks,” and said that “these attacks and shifting of blame by Mr. Wright cannot and indeed should not be tolerated in my opinion.”

Special Letcher Circuit Judge Kent Hendrickson did not chastise Wright during the sentencing last week, and did not make any public comments regarding the controversy.

Hendrickson passed sentence January 19 on Huffman after hearing victim impact statements from Hogg’s mother, and from victims Christopher Puckett and Samantha Mullins. Stacy Phillips, who was cut on the hand while attempting to pull Huffman off of Hogg, was unable to attend the sentencing, but submitted a written statement.

Defense Attorney Robert Wright said he had not seen the statements before the hearing, however Commonwealth’s Attorney Edison Banks said they were supposed to have been attached to the pre-sentencing report from the Department of Probation and Parole and were provided to Wright. Hendrickson gave Wright a few minutes to flip through the reports while the rest of the courtroom waited. When Wright indicated he was finished with the reports, the judge continued with oral statements from the victims while Huffman, dressed in an orange jail jumpsuit and black body armor, his hands and feet shackled, watched quietly from the defense table.

Connie Hogg cried as she read from a prepared statement about what her life has been like since her son was killed.

“Each morning, I wake up hoping and praying that this was all a nightmare and Mike will come back to us. But in a split second, I realize it’s not and I will never see Mike again,” she said. “Every breath I take, every beat of my heart has been affected by the death of my child.”

Mrs. Hogg said shopping even shopping for groceries, preparing his favorite meals, and hearing music he liked causes her pain. Even his friends’ graduations from college, marriages, and the births of their children are “bitter sweet.”

During Huffman’s testimony at trial, he said both sets of parents had lost a son, but Mrs. Hogg rejected his statement, saying Huff- man’s parents “can still see him, look into his eyes, talk to him, even touch him.”

“How dare he even compare his parents’ loss to ours?” she asked.

She said Huffman deserves to be in prison for the rest of his life, because she is convinced that if he were to get out, “he would not hesitate to kill again.”

Christopher Puckett, who was stabbed in the back during the attack on Hayes Street in Whitesburg, said the physical pain from being stabbed was terrible, and he remembers listening to his own mother scream and to himself scream as she squirted sterile water into his wound, swabbed it with a long cotton swab, and stuffed gauze into the cavity. Worst of all, he said, “this crime resulted in the loss of my best friend, a brother, a son, an uncle and those things can’t be replaced.”

Puckett said he has been diagnosed with post traumatic stress disorder as a result of the stabbing. He described nightmares of people trying to kill him, and said there are many days that he doesn’t want to leave the house because he fears someone is following him.

He said the jury’s recommendation of life plus 45 years was appropriate, because Huffman deserves to “spend every last day of his miserable life in prison.”

Samantha Mullins, who drove Hogg’s Jeep to escape Huffman as Hogg bled to death in the passenger seat, said she too has PTSD as a result of the incident.

“I remember for months after it happened I wouldn’t even sleep in my own house unless somebody was sitting by the front door,” Mullins said.

A friend sat with her during her night-shift job

She said she sat in Walmart parking lot crying several times trying to convince herself to go grocery shopping for the first time after the stabbing.

She said she has nightmares where Huffman and fellow defendant Patrick Smith have broken out of jail, and wakes up scared that someone is breaking into her home to kill her.

“I do not believe that Huffman is sorry. I believe he’s sorry he got caught. He has shown no compassion for anyone but himself,” Mullins said.

She said a friend she loved was taken away from her, and now she lives in fear. Huffman, she said, deserves to stay in prison.

Phillips was not present at the hearing, and the judge read his victim’s statement silently to himself.

“I haven’t been on the bench very long, but in the three years I have been on the bench, I’ve dealt with a lot of violence – domestic violence, street violence – and all I can say is I’ll never understand something like this,” Hendrickson said after finishing reading. “I just don’t get it. I thought the longer I was exposed to it, the more I’d understand it, but I don’t. It’s just tragic.”

Hendrickson overruled motions by the defense to reject the jury’s verdict of guilty on charges of attempted murder of Mullins and Stacy Phillips, saying there was “not unreasonable at all” for the jury to make that finding.

The jury had recommended life plus 45 years, however Hendrickson said while Banks “made a good argument” that the Supreme Court was wrong in its sentencing guidelines, it is the law and the Supreme Court decision would not allow the 45 years to run consecutive to the life sentence.

Hendrickson said he agreed with Banks that the evidence of Huffman’s guilt was overwhelming, and he followed the jury’s recommendation on all sentences, with the exception of the sentences running consecutively.

Huffman will be transported to a state prison as soon as the Kentucky Department of Corrections assigns him a location, Hendrickson said.